Rumor has it that Board Member Ann DeLacy showed up unannounced at the Oakland Mills High School PTSA meeting last night, declaring herself to be "the biggest fan of Oakland Mills High School." Really? Considering what she has been saying in public lately about the school, our neighborhood, and our students, that seems more than a bit...disingenuous.

Speaking of Oakland Mills High School, I had a run in with PTACHC President Reg Avery while waiting in line to see the WBAL Concert for Kids. It was awkward. I certainly didn't expect more than a gruff hello, but instead he burst out rather loudly, "and I'm not running for Board of Ed. So you were way off. Way off!"

So, you heard it here first, folks. Well, so did everyone else in the immediate vicinity.

Huge thanks to everyone who read my post about supporting the OMHS musicians. Thanks to your generosity and sharing, they've raised over two thousand dollars in the last several days. It is an awesome start, and I am truly grateful. If you have any other ideas about how to spread the word, let me know and I'll pass them along to Ann Faust. Here's the GoFundMe link.

PARCC scores for elementary and middle school are coming out today. I highly recommend this article to explain what the scores mean, and this is not the party line you'll hear at any of the hcpss information sessions. The most important thing to know is that they set what "passing" is after the students take the test. This is not at all what teachers do when they create tests. Teachers build a test so that they know exactly how much a student needs to know to be able to pass. That's how it works. Instead--

Says PARCC, "Some of your students have scored a varying levels on a test that may or may not have put them on a certain level. You can't know about the questions they answered, which ones they got wrong, or what specific deficiencies they have. And we won't even tell you the simple rating (grade) we're giving them for a while yet. But go ahead and take this gaping hole where data is supposed to be, and use it to inform your instruction."

What do your child's scores on PARCC mean? Nada. These tests and the manner in which they are scored were designed to make it look as though our public schools are failing. Also, don't forget that everyone knew that these results "wouldn't count". Including the kids. If you want to know how your child is doing, ask a teacher.

To close--a bit of out-of-town gossip with a local flavor: my husband and I were guests of the Washington D.C. Grammy Chapter at their holiday party last night. It was held at any amazing venue called the Sax. We felt like we had wandered into the world of Moulin Rouge. (The film, not the place.) It was a truly sensory rich experience. Hands down the best part was catching this on the big screen: 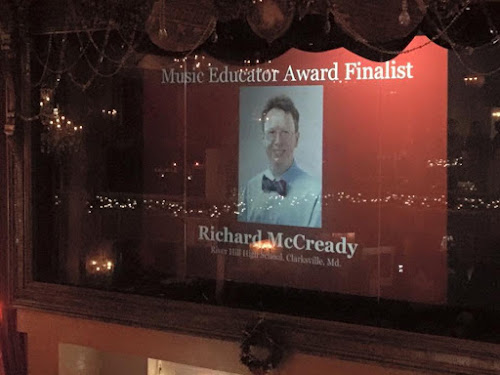