Dragging and the Dregs

That’s the number of blog posts I have published.

That’s the number of blog posts that contain the word “Republican”. Yes, I checked.

Although I’ve made no secret of the fact that I am a Democrat, I truly haven’t spent much time here dragging the Republican Party. That’s just not how I operate.

Yesterday I saw the most vile accusation, complete with photographs, printed on the Howard County Republican Party Facebook page. 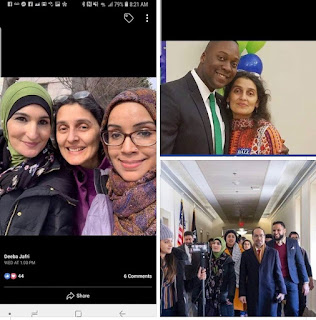 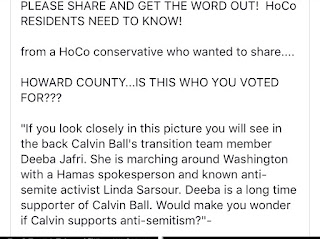 Translation: here are brown skinned people in photographs together. They are not our kind of brown skinned people. Let us take one piece of information we know about one of them and smear the whole lot of them without any other facts or context. Here you see the dregs of political discourse.

Truth in advertising: I know Deeba. She is a strong advocate for equality and social justice in Howard County. She also loves being in photographs as much as I hate them. At one event I dubbed her the “Selfie Ninja”. That’s just a part of her enthusiasm for being involved in good causes.

On Wednesday Deeba helped out a friend who needed a ride to Washington, DC, because her car was in the shop. An ecumenical group of faith leaders were presenting a letter to Nancy Pelosi in response to an upcoming resolution to condemn Congresswoman Omar for comments critical of Israel. You can read the letter here. Deeba isn’t a friend of Linda Sarsour, but she did have her photo taken with her because, as I said, she’s a big fan of taking photos at events.

What the Howard County Republican Party doesn’t tell you:

Oh, and one last thing. The Howard County Republican Party doesn’t publish the name of the person making these accusations. They are promoting one hundred per cent of the smear with zero per cent of the accountability.

There you have it: the Howard County Republican Party.

Oh, but Howard Republicans aren’t all like this, you say? How would we know? After all, their policy is guilt by association. Naturally they can expect to all be painted with the same brush.