As Clear As Pea Soup 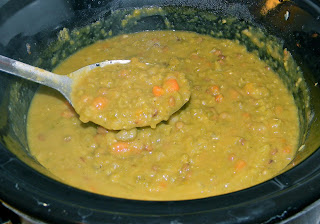 Was there one dish you hated above all others as a child? For me, it was my mother's split pea soup. It was so thick, more like oatmeal, and the texture alone easily stimulated that dreaded gag reflex. Sometimes I was kept at the table after everyone had left because of split pea soup.

Now I am a parent, and I have experienced a little of this from the other side. Although I've never forced my children to finish anything, I've still dealt with "just eat three bites" bargaining. It was this kind of haggling that finally led to my release from the torments of split pea soup.

In frustration, my mother said, "All right, just eat half of it!" And I took my soup spoon, drew a line down the center of the soup, and forced myself to eat half. The other half stayed in the bowl, exactly as I had portioned it, solid.

I looked at it. My mother looked at it. And then, after years of my childhood suffering and anguish, she said, "Well, I guess maybe it is too thick."

It was life changing. She started making thinner pea soup, and I actually liked it.

But the bigger point is that the evidence was right in front of her face, and she acknowledged it. I have to give her credit. She was highly invested in her point of view. She could have dismissed me. It's hard to imagine how, but she could have.

I am extremely frustrated right now with groups of people, be they national or local, who have factual evidence staring them in the face, yet refuse to acknowledge it. To borrow a phrase from Hillary Clinton, "They just will not live in an evidence-based world."

What is an appropriate response to that? What is an effective response to that? If, no matter how much credible evidence is presented, the answer is merely to ignore it or twist things to look like something else, how can that lead to fruitful discourse? And then does our goal become merely to win by brute force, since meaningful negotiation is impossible?

I learned something very valuable in that moment with my mother, so long ago.  I learned that sometimes the truth will stare you in the face. It may not be the truth you want to see. But if you are brave enough, and strong enough, you will accept it and incorporate it into your thoughts and actions. This lesson has become a part of me in my interactions with my husband, children, friends, co-workers, and in community life.

So, if I know this, why doesn't everyone? Can it be taught? Please, please--let's find a way.