It's A Long Story

This summer I thought a lot about what it means for my daughter to be a student in the GT program at school. I get the feeling that kids think: they test you, you're smart, so that's your designation. If the work gets tough for you, they may throw you out, because it means you're not smart enough. That's what comes from having so much of your childhood determined by tests.

I wanted to give my daughter a different perspective. So I developed the Grit and Determination concept. GT doesn't stand for Gifted and Talented, I told her. It stands for Grit and Determination: the qualities that GT students are willing to use when the work gets tough. I worked it all out in my head; I was very excited.

Of course, my GT student immediately saw through my plan. "Doesn't Determination begin with a D?" she asked, helpfully. Yes, well...

Today I present you with the result of Grit and Determination: 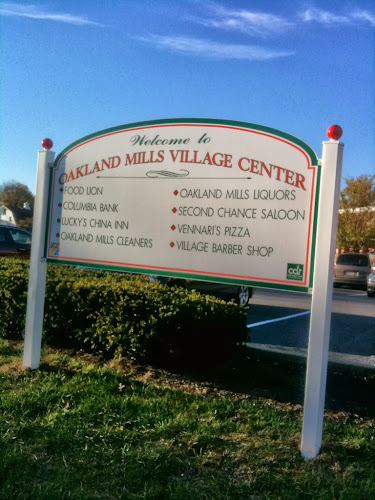 Oakland Mills Village Manager, Sandy Cederbaum, has been working to get a new sign for our Village Center for a long, long time. How long? Well, the old sign is mentioned in the Master Plan as being almost seven years old. And that was in 2007. So, the sign which was put up as a temporary sign during the Village Center construction--the sign which was old and worn in 2007--was still sitting there in 2013. Until yesterday.

Sandy has been working, negotiating, sending emails, making phone calls, and following up on all of this to get a new, permanent sign for our center. This has involved years of work with Cedar Properties. She never gave up. I can't imagine how frustrating this was. I'm not sure that I would have had the tenacity that she has shown as she worked steadily towards her goal.

So, a giant-sized HoCo Holler! today to Sandy Cederbaum, the extremely gifted and talented Village Manager in Oakland Mills. Her grit and determination are a sign of what I love about our community.

Posted with Blogsy
Posted by Julia A. McCready at 4:32 AM