Sometimes a pair of googly-eyes makes all the difference in the world. The folks at Healthy Harbor in Baltimore seem to know this. The Healthy Harbor initiative, whose goal is "a cleaner, greener future for our neighborhoods, streams, and harbor" has put a remarkable device to work in the Inner Harbor. A trash wheel. But that's not all. They have created an anthropomorphic personality for their very useful device on Twitter. (Note the googly-eyes.) 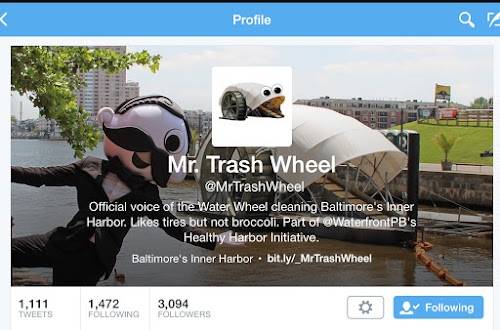 Oh my word, this guy is adorable. Move over, Colonel Gateway. Not only is this creature cute, he has a funny and engaging Twitter presence. I have come to be rather fond of him. In fact, I think they should open a merch store for him. Who wouldn't want a Mr. Trash Wheel t-shirt? He's already beginning to make a name for himself on social media, coming in second in a Baltimore Magazine poll of best local social media accounts. Can the Mobbies be far behind?
As if this weren't exciting enough for our hardworking Baltimore guy, he had a bit of an on-the-job predicament this week. On August 5th at 12:33 Twitter-time came this tweet:
@MrTrashWheel: DID ANYONE LOSE A SNAKE

Yes, in addition to all the normal stuff that gets siphoned off, a ball python turned up on the trash wheel. This was big news. Practically a social media circus. If you go back and follow the thread you can see how much real-time engagement was going on. It's hilarious.
In the end a professional was dispatched from the National Aquarium to take possession of the snake, and life returned to normal for our hero, Mr. Trash Wheel, after a suitable fifteen minutes of fame, that is. He continues to do his job cleaning the harbor and engaging the community around issues of a cleaner local environment.
But that's not the end of the story. As it often the case these days, media excitement spawned a new Twitter account: 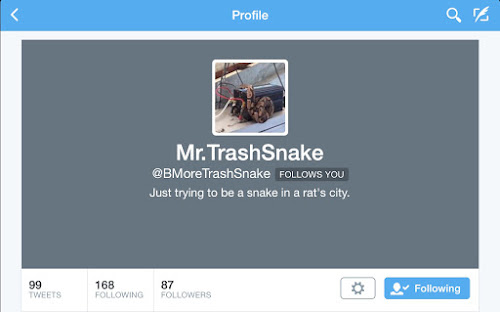