A New Kind Of Party

Back in the day there was such a thing as a HoCo Blog Party. Well, orginally I believe they were called BlogTale parties. They started out small, a chance for local bloggers to get together and chat. Then they evolved to include bloggers and their readers. At some point they morphed into unwieldy events peopled with those who wished perhaps to influence local bloggers, those who wished to see and be seen, and those who were hoping for a free drink ticket.

It became customary to measure the success of the party by the size of the turnout, rather than the content  of the conversation. That’s when they became less interesting to me. I’m not a big crowd person, if you hadn’t guessed already.

Last night I found myself at a different sort of event, one that I hope there will be more of. The hosts of the “Elevate Maryland” podcast have rebranded their venture and they’re going live. Live shows, that is. They began with a show at Cured with Goucher Poll Director Mileah Kromer. The guest for their second show was Josh Kurtz of Maryland Matters. The setting: La Palapa, on Main Street in Old Ellicott City. 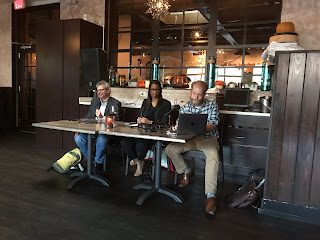 Some of the watchers: 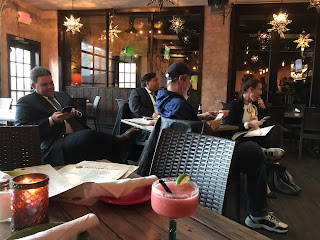 We were set up in a lovely private room at La Palapa so that extraneous sound wasn’t an issue. Staff moved in and out taking and delivering orders almost silently. The service and food were excellent, and, had it not been a school night, I would have indulged in more than one margarita.

They were there to talk politics, especially early voting and various races in Maryland. And the people who showed up were the kind of folks who wanted to hear that kind of talk. After the show was finished there was time for conversation and socializing.

It occured to me that the next thing on the local scene might be the HoCoPodParty, and that I was lucky to be around for the beginning of it. If you want a taste, the next episode will be on the
Thursday after Election Day, with Guest Bryan Sears of the Maryland Daily Record to sort out election results.

I’m proud to say that I (and Village Green/Town²) are founding sponsors of Elevate Maryland. I think
that Candace and Tom are making a valuable contribution to local discourse and I hope you’ll give them a listen. You can find Elevate Maryland on iTunes if you can’t make it to a live taping. Strawberry margaritas are an added bonus to being there live, but they’re not a requirement for enjoying the show.