My Midterm election mood, direct from Twitter, is as follows:

You can't say you "love" someone and then vote in such a way that you place their lives and the lives of people like them in real danger. Y'all better start going to the polls with more than yourself on your mind. @word_made_fresh

I told someone that voting for Trump while claiming to care about your minority neighbor is like voting for someone whose supporters think they should be able to burn your neighbor's house down to run the HOA. Your neighbor won't care how much you say you love them after that. @upsidedwnworld

This is every bit as much a local issue as a national one.

Lately I have noticed how many trolls have filled up the comments of campaign posts for County Executive Candidate Calvin Ball with sneers like,

He loves those illegals more than he loves us.

Comments like these show fear and a mindset of scarcity.  This is a small-minded “othering” of those who look different, worship differently, or sound different when they speak. When Dr. Ball articulates his vision for a more inclusive Howard County, these people hear an entirely different message.  The diversity of his campaign video says to me, “we the people” but to them it says, “those people are going to take my stuff.”

There are some folks whose idea of democracy is voting to protect a Howard County where they can exert influence over who gets in, how many, where they live, and where their kids go to school. Some of these people are very nice people. But this worldview presents a major stumbling block if we ever mean to address systemic injustices.

You can't say you "love" someone and then vote in such a way that you place their lives and the lives of people like them in real danger.

An amazing thing about love, and justice, and generosity, and respect: they don’t run out because they are shared. There is no finite “pot of good stuff” which will be diluted or drained when we decide to place value on the lives of the undocumented, or people of color, or Muslims, or the poor. In fact, our democracy can only be made stronger by welcoming diversity, by including our neighbors.

In truth, the election in Howard County comes down to this: 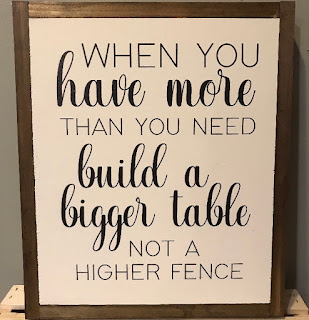 You think building a bigger table is too expensive? The cost of a higher fence far outweighs it: a democracy that is not truly a democracy, a land of plenty destroyed by a fearful grasping for resources, a community where “those people” lead parallel but lesser lives.

Calvin Ball and Allan Kittleman have much of the same professional experience. Both, it can be argued, know how to do the job of County Executive, But, of the two, only one has shown he understands the responsibilities that “we the people” requires. Calvin Ball has proven he is willing to take the risks and make the decisions to make Howard County better for all of us.

And that’s why he has my vote.