Halfway up the stairs
Isn't up
And it isn't down.
It isn't in the nursery,
It isn't in town.
And all sorts of funny thoughts
Run round my head.
It isn't really
Anywhere!
It's somewhere else
Instead!


I thought of this poem as Tom Coale announced his candidacy for the House of Delegates on Tuesday night. Back when we were very young, memorizing poetry was an established childhood activity. I think this poem may have been the first one I ever committed to memory.

Back to Mr. Coale. Why on earth did this poem come to mind? Well, consider this: 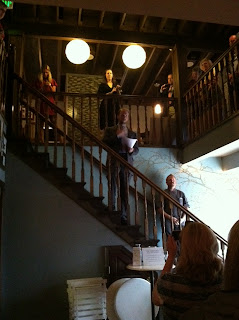 You've seen a number of versions of this shot over the past several days, I suspect, some dark, some blurry, some much better. We all had our reasons for wanting to catch that moment. For me, the image of a political campaign (and let's face it, a political career) taking flight from smack dab in the middle of the staircase was compelling.

As a blogger, Tom has shown interest and thoughtful insight on both "Columbia" issues and "Howard County" Issues. As a Columbia Council Representative, he has been comfortable working to improve Columbia while understanding how we fit into Howard County. He clearly understands the relationships that will move things forward, make things work.

His forthrightness has made him a target for those who want to have things their own way. Clearly this doesn't bother him. Here he is, taking his place in the center of it all, to move forward in making things happen for Howard County. I dare say Tom chose this exact spot with the knowledge that it was the most central location to be seen and heard in the particular venue he selected.

If you care about clarity, you can't do better than to place yourself halfway down the stairs at The Rumor Mill. The point is made: I'm not afraid to be out here where everyone can see me. In fact, that's the whole point in a nutshell.

In politics much is made of "where I stand" or "what I stand for." On Tuesday night, Tom Coale took his stand in a position of great vulnerability--he would be viewed at all angles, all levels, all sides, and while people moved in and out of the scene from the main entrance and the kitchen. Some politicians couldn't handle that many variables. Some wouldn't allow that much lack of control.

"Proud Evangelist for Community Involvement." Consistent with this description on his Twitter account, Tom Coale chose to be in the middle of things on Tuesday night. He is clearly proud of his community, and excited to advocate for it. But the key for him is involvement.

Meaningful government involves the governed. And he wants to be in the middle of that: not making us look up to him in a high, lofty place, nor pushing us on by barking orders from behind. In A.A. Milne's poem, the central character has found a place to sit, and think, and imagine. Clearly Mr. Coale has done that, and more, as he has made his plans to run for delegate.The next step is, of course, to stand up. And he did.

If you were there, you felt the energy and sincerity of the moment. If you weren't, don't worry. If Tuesday evening was any indication, Tom will make sure to make himself and his goals accessible to the community.