First in line was a rather rumpled, portly fellow, early thirties, scraggly facial hair. Not at all an impressive sight, yet I overheard him speaking to the woman politely as she completed his order. Next, a young man in his early twenties with Downs Syndrome, clearly able to walk over, place an order and successfully handle the change of money, and return home.

It was a nice afternoon and I didn't mind waiting in line. It was my last stop after running a bunch of errands, and it was a treat for myself: a watermelon snowball at Pete's. If you're not from my side of town, you may never have been to Pete's. Here are some reviews, one from the great hocolocal HowChow himself. Here is a lovely hymn to the joys of Pete's in blog form. ( Scroll down to the end.)

Here is a picture of Pete's. 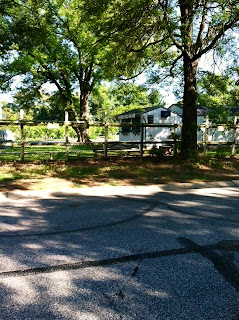 If it lacks appeal in this shot, that is because this was taken this morning at nine am when Pete's was closed. What's missing from this scene is, of course, people.

So I was waiting in line and I looked over to a shaded picnic table where a family of four sat talking, laughing, and enjoying their snowballs together. I was close enough to be eavesdropping, but my Spanish isn't quite good enough for that. I do know that the youngest son suddenly clutched his forehead and it was clear he had been stricken with "Brain Freeze", or what my mother used to call an "Ice Cream Headache". Expressions of sympathy and laughter followed. The father gestured to the son to press his thumb to the roof of his mouth. (I wonder if that works?)

It truly wasn't necessary under these circumstances for me to know much Spanish at all--a beautiful family on a beautiful day in Columbia at the neighborhood snowball stand. The joys of summer are a universal language.

As I walked away with my snowball, three new customers approached. An African-American grandmother who used a big umbrella to shade herself from the sun, and her two lovely granddaughters. The older girl was just on the verge of being a full-blown teenager. It made me think of my own daughter, so ready and yet unready to make that leap.

Pete's stands out from its surroundings as an island of the rural past in the sea of planned neighborhoods that is Columbia. It draws us in from Oakland Mills, Long Reach, and Owen Brown. Our world may be mostly chain restaurants and big box stores, but Pete's is pure mom-and-pop. The signs are hand-painted and imperfect. You can pick up their home-grown produce and hand crafted honey while you're there. It doesn't surprise me that I am not alone amongst local bloggers in singing its praises.

If James Rouse meant for us all to live together in peace, Pete's is doing its part to encourage that. On a hot summer day our differences are not as important as our common desire to cool off with something sweet at a little place that "time forgot and decades cannot improve."