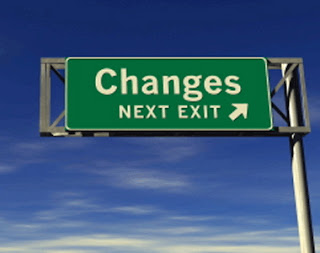 Thursday morning I got in my car and the windows and mirrors were covered in rain splots and condensation.The windows were easily cleared by the wipers, but the side mirrors were not so easy.  I looked around for a paper towel, take-out napkin or tissue in the car, but there were none. Actually, it wasn't my car, it was my husband's car, and he isn't as concerned about always having paper goods as I am.  Why wasn't it my car? Well, that's a story about a Peter Gabriel concert, a road trip, and a lot of other stuff.

Moving on.  I was in a rush, so I decided I'd be able to manage without the side mirror until I was able to pick up something to wipe it off.  I rolled down my window and prepared to wing it. It was a lovely Fall day, no problem.

Until I got on Route 29 South.  I quickly discovered I was going to need to merge.  Merge left.  Yikes!  Couldn't do it.  "No problem!"  thought I.  "I'll just stay in this lane, get right off, and then pull into the Walgreen's and deal with this."  Exit stage right.

Until I arrived back on the bridge connecting little Patuxent Parkway with Route 175 and I realized that I would have to merge.  Merge left.

Have you ever tried to merge from 29 onto that bit of road?  It can be life or death, I tell you.

At this point I was beginning to sense a pattern.  No matter what I did, I was going to need to merge left, and I couldn't see a thing.  Bits and pieces of a song began to circle around my brain.  Maybe you would see your life passing before your eyes, but, hey--I'm a musician.


After going around in circles several times, I realized that my plan wasn't working.  I would have to try something else. (Duh.)  So I reached out, with my bare hand, and cleared the driver's side mirror.

And I could see.  Simple as that.

And my hand was all slimy.  Ugh.

Now, as readers of this blog, I know you will expect a lesson here about how we go around in circles here in Columbia, doing the same things over and over again that don't work, and expecting a different outcome.  And you're expecting me to say that sometimes you just have to get your hands dirty if you want to make meaningful things happen.

Not a chance.  This is just a crazy Monday morning post dedicated to HoCo's own Mickey Gomez. She can take something as simple as a hairbrush, or a dog, or a TV show and create high art and drama through deliciously crafted humor. Or maybe it's the other way around.

Thanks, Mickey, for helping us take ourselves a little less seriously.