Break Down These Walls

Once upon a time there was an elementary school that had a window right in the middle of the office. The window looked out onto a grassy courtyard. I imagine it must have been a refreshing view for teachers and staff as they hurried by, or a quiet place to catch one's breath while waiting to make photocopies. It was a window in an unlikely place, an unexpected flash of green and sky.

And into this seeming impasse came someone with imagination and resolve. And what had become a stumbling block became something new. 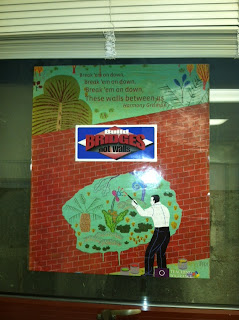 
As we come to the end of this campaign for CA Elections, this poster is more relevant to me than ever.  In Oakland Mills I have seen first-hand evidence of those who wish to build up walls in our community.  I know that there are many differences of opinion in Columbia. Some may be generational, some based on deep-rooted political perspectives.  But our goal should be to bring more people to the table, not to shut them out.

I refuse to be defeated by obstructionist attitudes about Oakland Mills and Columbia. Our job is to face the obstacles with imagination and resolve. Good representation includes understanding of many views. True progress is made through building bridges, not walls.