Signs of an Ancient Civilization


One lovely Spring afternoon I sat in the beautiful home of Phil and Lynne Engelke, talking about what Columbia was like when they first arrived. They live in one of the iconic Pacesetter homes, which they have transformed, little by little, into a showcase for what is possible for a "starter" home. I was honored to serve as one of the docents last year when their home was selected for the Columbia House Tour.

The conversation turned to how people hang on to the past. I was fascinated when Phil shared this bit of information:

"When we came to Columbia, things were just beginning and the Rouse Company wanted everything to look perfect. And we were all young and hadn't taken care of a house or a yard before, so if we saw the Rouse Company putting out mulch, we mulched, and if those wire harnesses came off of the young saplings as they grew you saw folks go out and make new ones for them! Now it's almost fifty years later and you still see this excessive mulching of trees. It isn't necessary, in fact. Sometimes it is even harmful for the trees. But people keep doing it because that's what everybody else does, and that is how it has always been done. "

Phil and Lynne are truly the antithesis of this way of thinking. Thoughtful and creative people, their home and their lives show clear evidence of growth, change, evolution and adaptation along with a deep reverence for ancient cultures and religions. It's easy to see why they are my kind of "Pioneers."

Arriving home the next day, I noticed that the landscaping company for my HOA
had begun their annual Spring yard work. And then I saw it. I stopped dead in my tracks. 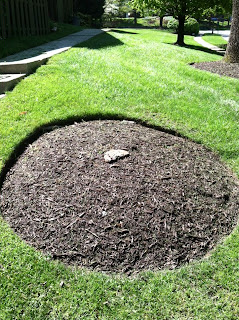 They had mulched a stump. A stump.  The tree in question had been small, sickly, then died, and was cut down last Fall. But the stump remained, and by golly, they mulched it in a beautiful circle just they way they did when it was alive.

You can't make these things up.  I have since seen several more around town, like signs of an ancient civilization. We keep things exactly as they are, whether it makes any sense or not. And when they die we won't question why, or try something new, we just cover it up with more of the same.

I highly recommend two articles on this topic. One is a delightful piece on why you shouldn't over-mulch trees.  The other is this, brought to my attention by Bill Santos of Columbia Compass. It captures local dynamics so acutely that you can't believe the author hasn't been at a CA Board meeting.

My favorite quote, "If everyone who wants to step up and do something to make this city better has to go through this, not many people are going to step up."

We have some big challenges ahead. I, for one, don't want to see people just throw more mulch at them.