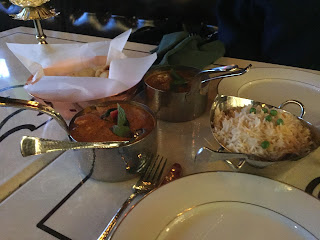 There's a new Indian restaurant in Clarksville. It's called Mint, and it occupies the location originally held by Pudgies Pizza. It has been in the works for a long time, and there's quite a bit of buzz on the Clarksville Happenings Facebook page now that it's up and running. My husband and I went there on Saturday night.

The space has been beautifully redone. If you remember the Pudgies layout, you can see how they've turned the central area (that used to be the walk-up counter) into an elegant bar. Of note: they have gender-neutral bathrooms, which we thought was pretty cool.

The service was attentive, perhaps a hair too attentive, but overall it was fine. My gin and tonic was perfect. The food? Well, it was tasty. But it reminded me of the food at Royal Taj: it was too sweet. When I told my teenaged daughter this later, she said that a friend had dismissed Mint as "Indian food for white people."

We are, as my in-laws would say, spoilt for choice when it comes to Indian food in Howard County. For years our go-to has been House of India. In recent years I feel that they are not as consistently good as they used to be. They don't always seem to be giving their best effort. I have come to prefer Flavors of India. I'd like to visit Chutney more often but my husband doesn't seem to be convinced. Or maybe we just have too many choices.


So what do you think? What makes for an excellent Indian restaurant? Have I missed one that you think I should know about?