This story took me back. Way back.

My high school years were spent in Stamford, Connecticut, where there was nothing to do. At least, nothing to do for teenagers. I survived by belonging to the church youth group and participating in music and drama at school. This was years before the Mall was built. Options for fun ranged from going to the movies, bowling, and the indoor mini-golf in Norwalk. In summer: the beach.

And so it came to pass that there arose a spate of property crimes in Stamford that were clearly perpetrated by teenagers: street sign stealing, and mail box polo. No, I didn’t participate, but, I knew people who did. One of my friends proudly displayed a sign she had “liberated” on her bedroom wall. I always wondered what her parents thought of that.

So, when I saw the following post from the Columbia Association, I had a feeling of recognition. 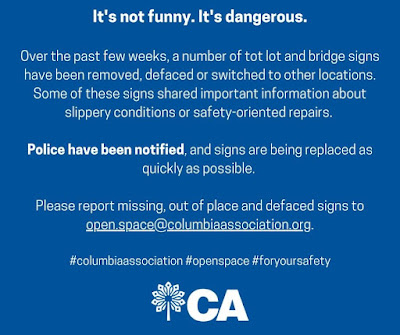 I think I know the kids who are doing this. Not literally, of course. But this seems awfully familiar.

I suspect that local teens, squirrelly from lives compressed and restricted by the pandemic, are doing what teenagers do. They are looking at risky behavior as a challenge and an adventure. They are not using that part of the brain that would tell them that they know better than to do this, because that part hasn’t developed yet.

You know who does benefit from that part of the brain? Parents. (And other adults, obviously.) This post from CA should be a heads-up for folks who don’t particularly know what their teens are doing when they leave the house. On the one hand, you don’t want to micromanage their every move. On the other hand, did you know your kids are engaging in property damage, Mr. and Mrs. Smith?

Yes, this is a hard time to live through, and particularly so for parents. I’m not suggesting that the blame for such behavior rests on them. Nor does the blame lie on school buildings being closed for in-person learning, though some folks would like to place it there. It’s everything: widespread illness, lack of social contact, businesses being closed, activities cancelled, an uncertain future.

In the face of all that, some teenagers are going to do what teenagers do. They need support, and guidance, and some tough love, probably. At least for now, Columbia is on notice and perhaps that will be enough to extinguish the behavior.

In the meantime, if you have a teen, it might be a good time to have that talk.