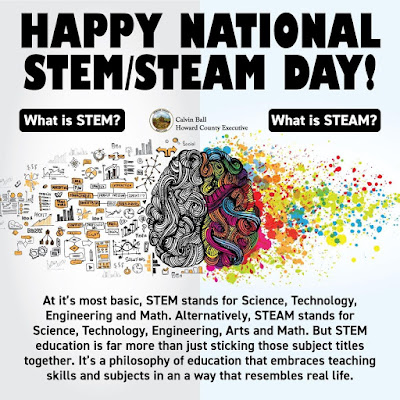 Almost immediately someone jumped in to denigrate the inclusion of Arts Education, labeling it as mere political correctness. It was clear that this poster judged fields of study purely by how much money one could expect to make. If it wasn’t going to be a lot of money, he posited, then study of the arts and/or humanities was selfish.

I am happy to say that his statements did not go unchallenged. But I’d be naive to think there aren’t more people out there with that attitude, especially in upwardly-mobile, results-driven Howard County. Nonetheless, I find these arguments not only wildly ignorant but also disheartening. Devaluing Arts Education doesn’t make STEM programs stronger. In fact, the inclusion of Arts Education provides students with vital creative and problem-solving experiences. Arts Education in combination with other STEM learning provides a kind of “leavening” that promotes deeper learning all around. They’re better together.

Think of astronaut Dr. Ellen Ochoa, seen in this photograph playing the flute while on a mission in space. Her years of music study were not separate from her eventual pursuit of Engineering. All the musical lessons and experiences laid the groundwork for her future studies and career path. All of it is a part of the adult she became. 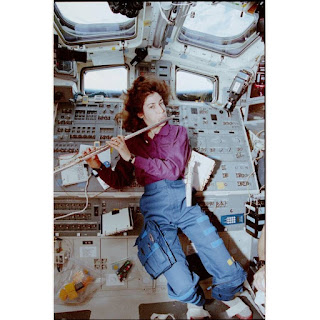 As I said when responding to the Arts-basher mentioned above:

It is the experience of these different educational domains in combination that produces an end result which is greater than the sum of its parts. We don’t say that yeast should be able to stand alone, apart from all the other ingredients in a loaf of bread!

As I pondered this discussion I came across a video of a former ballerina with Alzheimer’s reacting to music she had once danced to in her youth.  The complete transformation of her facial expressions and the immediate recall of dance movements learned years before is stunning. You see how deeply the music is wired into her brain along with the kinesthetic memory of the choreography. Those links prove stronger than age and congnitive decline.

You may recall I wrote about the Music and Memory project and their documentary, “Alive Inside”, back in 2014.

“Alive Inside" follows the Music and Memory project, which worked with Alzheimer's patients and found music to be "a powerful tool for connecting elders to the people around them and restoring a sense of self."

In an interview for Science Friday, the late neurologist Oliver Sacks describes what happens in the brain when music is played or even imagined.

...many areas in the brain get activated. Some of them are hearing areas, some are visual areas, motor areas, many are emotional areas. There's no one music center in the brain. There are a dozen networks which hold together and, in this way, music is rather different from language. There are very specific language areas in the brain. And if those are knocked out, people can become aphasic, and lose language.

Whereas it is almost impossible to lose music; it's very robust.

Arts Education connects. In this particular case music is the connection, traveling within the brain to all the deepest parts of the self. In the case of the ballerina it is the music in combination with the kinesthetic memory of dance which is preserved even when cognitive areas are damaged or degraded. The arts create networks within us that last. They deepen and magnify who we are and what we learn.

The arts are not “separate from”. They are inextricably “linked with” our other learning experiences. Arts Education is the oxygen which allows the strictly cognitive paper and pencil work to "breathe" into the student and be meaningfully retained, the leavening which allows the learning process to rise, the glue that makes the learning stick.

The description of STEAM Day states:

STEAM is a philosophy of education that embraces teaching skills and subjects in a way that resembles real life.

If you’ve ever participated in STEAM activities you know they are hands-on, multi-sensory, encouraging divergent thinking, questioning, creativity. All of those things are hallmarks of good Arts Education programs. It looks as though the STEM folks are finally tuning in to how successful this way of learning can be. Not only is there room for the arts in STEAM, the truth is that this approach would be significantly harmed without incorporating them into the mix as a valued partner.