The folks over at Hatred United, and, others like them who percolate around the Internet, are playing a little game with words that needs to be stopped right now.

Here’s their game: if you object, you must be doing so because you believe the SMOB should be protected because he is a minor. And that must mean that you somehow, deep down, acknowledge that he is not qualified to represent students on the Board with a vote, because: minor, age protected, deserving of a special kind of deference or respect.

Oh my, I have seen these people play out this little game with themselves just for the delight of saying “See? See? D’you get it?”

If you don’t want him to be abused you must admit that he’s just a kid and he doesn’t belong there.

We should all be tired of this game. It is a not a game and the answer is simple: there should not be abuse for anyone because abuse is wrong.

But there is a far larger, more central point that is not being addressed when we allow ourselves to get sucked into this carousel ride of bad logic.

The Student Member of the Board should not be the target of this treatment because he is a student.

Mr. Koung, and those he was elected to represent, are the entire reason the school system exists. There is no Howard County School System without them.

Just think. What are we about? Who do we serve? Think of other systems similarly structured. Who is at the center?

The student fulfills a special role on the Board not because of anything they are not, but because of who they are. That’s it. That’s what the Howard County Public School System is about, Charlie Brown.
Some people will do an awful lot to obscure that truth from being seen, because ignoring it allows them to suggest that all the big power belongs to them. It doesn’t. That power is meant to be shared. The amount of immediate pushback from current and former SMOBs around the State of Maryland over the past few days has made it abundantly clear who understands how the process works and who does not.
Anna Selbrede, HoCo SMOB 2017-18, has been organizing thirty years of SMOB materials in Howard County alone. A letter submitted by the group is both thorough and pointed. 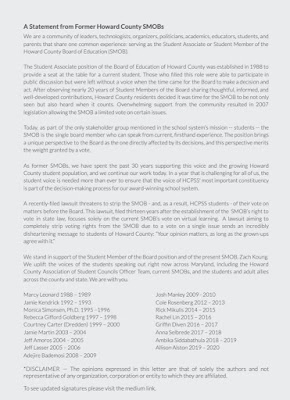 Today, as a part of the only stakeholder group mentioned in the school systems’s mission — students — the SMOB is the single board member who can speak from current, first-hand experience. The position brings a unique perspective to the board as the one directly affected by its decisions , and this perspective merits the weight granted by a vote.
No more abuse. No more gaslighting, bad logic, painfully weak self-justification. If you see it, say something. The Baltimore Sun Editorial Board did. So can you.