I remember being fascinated in school when we learned about the theory of spontaneous generation. From Biology Online:

People used to think that mice could form spontaneously from stored grain. Or, maggots could spontaneously appear in meat without the involvement of any biological precursor, like a parent.

Something about adults believing something so patently ridiculous amused me.

But now certain events in Oakland Mills have given me pause. An empty lot, which has been nothing but an empty lot for as long as I’ve lived here, has suddenly given birth to vehicles.

Multiple vehicles. Some of them are enormous trucks. Some come and go, some just sit there as if abandoned. 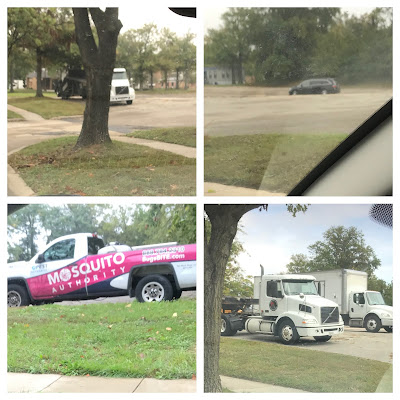 Truly I thought nothing could make that forlorn lot look worse. I was wrong.

What could have attracted them? It’s true that the lot was once the home of a gas station, but it’s never given rise to cars and trucks before. Something in the environment must have changed…(puts on scientific thinking cap.)

Okay, my approach is tongue-in-cheek but the situation is factual. Not only is the lot an eyesore it is also a safety hazard. We have plenty of kids and teens in Oakland Mills and one of these trucks is a car carrier with at least one car attached. There’s no fence that would prevent a curious/foolhardy climber. For that matter, this piece of land is not supposed to be a parking lot.

What has changed? I had heard that upcoming new ownership of the lot would mean that finally there would be some action on this property.

In the meantime? This is not exactly the kind of action I was expecting.

In asking around I’ve learned that the current owner of the empty lot is also the owner of the Oakland Mills Dunkin and a few others in the area. Hmm. You would think he would want to be a good neighbor. If you want people to keep coming back for your coffee and donuts it would behoove you to treat the neighborhood with respect.

But I would like mine without a side of trucks.