A Slice of Small Business

It’s Small Business Saturday. I’m a strong supporter of shopping local, as regular readers of the blog know. It’s particularly important to patronize our mom & pops after a year of pandemic closures and restrictions. I’m not at all excited to spend my money at businesses that turned out to oppose a living wage, but that’s another post altogether.

Today I want to talk about pizza.

Yesterday residents in Oakland Mills were bemused to learn that the Oakland Mills Village Center will soon be marking the Grand Opening of a new business: 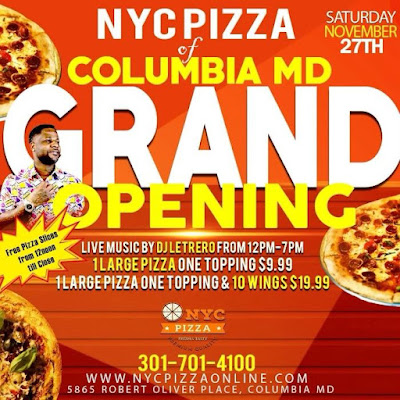 Why “bemused”? Well, the Oakland Mills Village Center already has two establishments that serve pizza: Pizzaman, and Little Caesar’s. And NYC Pizza is replacing long time local favorite Vennari’s, which merged with their nearby location in Owen Brown.

That’s a lot of pizza.

The departure of Vennari’s left many folks with the impression that perhaps one village couldn’t support three pizza places. And here comes a new one.

If you are curious as to how we could have arrived at this juncture, it’s really quite simple. The land that the Oakland Mills Village Center sits on has multiple owners. So each pizza place is on land owned by someone different. The newest one will be a tenant of Cedar Properties.

As crazy as it seems to me, none of these owners have a responsibility to the Village of Oakland Mills, nor to the well-being of the Village Center. The Oakland Mills Community Association can ask to be kept informed as to what is going on, but they have little (probably no) input on any of this. While we as a community naturally have questions and concerns, we have no direct access to the actual owners so often it’s OMCA that gets an earful: the Village Manager and the Village Board.

My two favorite comments in an online discussion last night went along these lines:

Is this survival of the fittest?

Maybe they think that’s all we eat.

I would hazard a guess that each individual owner is motivated by trying to find a business that can pay the rent and have enough economic success to keep paying the rent. That’s it. Larger property owners like Cedar surely have all sorts of data and economic projections to rely on. I can’t begin to imagine what they truly care about.

Does no one have the sense that God gave a grasshopper that it would make more commercial sense in the long run to commit to a variety of businesses that won’t cannibalize eachother?

On the other hand, leaving such decisions to community groups would undoubtedly lead to the kind of Village Board meetings I used to dread, where angry people show up demanding a recreation of their youth while others dither on long past the time limit waxing eloquent about a nice cheese shop. I get that. But how I wish there were some sort of working group that included all the owners and Oakland Mills Community Association leaders.

Yes, I’m imagining some sort of Knights of the Round Table where all were pledged to the overarching cause of sustaining a Village Center that was economically successful and good for the community. Right now what we have is a misbegotten potluck where everyone has brought jello salad.

No, I don’t have any expectation that this might actually happen. I can dream, can’t I?

On a positive note, I’ve learned that the owner of Pizzaman (which has an extensive menu far beyond pizza) had nothing but positive words about NYC Pizza. And a bonus: he’s planning to introduce new menu items from his native Nepal.

I love our Village Center, probably because I love my village. There’s a lot going on when I stop by the LA Mart for groceries or pick up carry out from Lucky’s. (I’m trying to cut back on that regular Dunkin drive through habit.) We welcome folks from all over the County at the Columbia Ice Rink. Althea’s Almost Famous food truck draws happy eaters from around the area. I buy my occasional lottery tickets at Sam’s Mart where they always wish me “good luck.”

We are hardly languishing over here.

I do wish that someone would open the Great Big Book of Village Centers for me and explain how we came to have so many different owners for a plot of land that is not really all that big. It's beginning to take on a rather Game of Thrones vibe for me.