Yesterday was a very rough day.

The final indignity came right here at home in Howard County, where the Board of Education Building was damaged by vandals. 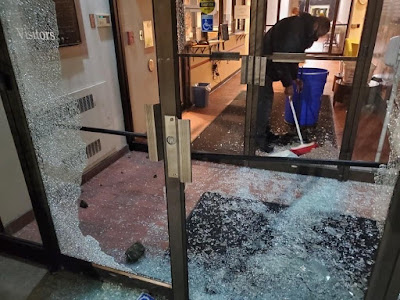 That’s what yesterday was all about, wasn’t it? Some people break things. Other people will have to clean them up.

Or perhaps it was about those who insist on justifying their own violence, born of the anger that someone of their importance did not get their way, by equating it with the outcry of those who have been oppressed in this country for over four hundred years. It’s not at all the same.

Yesterday was brute force and threat, terror and mockery.

What will today be about?

Today they will order new glass at Central Office. They will try to reassure staff who now feel less safe. They will be assisting the police in identifying a suspect. And they will continue to do the work they have been doing everyday, keeping the schools functioning during distance learning. Because that’s their job. That’s what they do.

That’s immediately what I thought of when I saw the destruction at the Board of Ed. What did they think they would accomplish?

Fear and intimidation, I suppose. Like showing up at someone’s house when you don’t agree with them.

The fact that we have people like that in Howard County sickens me.

Our teachers will still get up this morning and try to make the day's lessons the best they can make them while also trying to be there for kids who know something truly awful happened in Washington, DC yesterday and are trying to process what it means.

Oh, and Central Office was attacked, too. That’s not going to make our children feel very safe.

The attack on Congress yesterday was fueled by lies, like “election fraud” and “Trump won”. The attacks I read daily about our schools in Howard County are also fueled by lies:

Fueled by lies, motivated by privilege.
Some people break things. Other people have to clean them up.