The Columbia Festival of the Arts is sponsoring a song-writing contest and the ten finalists await your consideration and votes for the Audience Choice Award. The contest is called “Songs of Strength.” From their website: 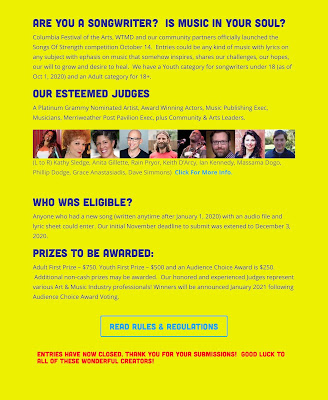 The announcement on social media of the ten finalists caught my eye because one of them is Alan Scott.  You may recall I’ve written about him here before, most recently this past fall.

That post is about the song which has earned Scott a place amongst the ten finalists:

Where there is hope

where there is freedom

where we fight for justice

Where you build a bridge

Made of faith, made of courage

He will walk beside you.

It’s no secret that I’m a big fan of Scott’s work already and you won’t be surprised that I’m downright exhorting you to vote for his song in the Columbia Festival of the Arts contest. But it’s only fair to encourage you to listen to all of the finalist’s songs and rate them, too. Their rating system is from 1 to 10, with 1 being the lowest and 10 being the hightest, which I found a bit counter-intuitive, so I’m warning you in advance.

It looks as though the voting is once per device, but I will see if I can get clarification on that. You don’t have to register or give any personal information to cast a vote but you can voluntarily sign up to receive updates from Columbia Festival of the Arts. Here’s the link to vote:

While you are there you might want to poke around on their website. It is, as my mother would have said, “snazzy.” They have a variety of things going on right now and it’s worth a minute to explore their offerings.

Our community has responded to the challenges of the pandemic in so many positive ways. Highlighting how the arts give us strength and help us express the deepest parts of ourselves in hard times is another valuable mission among those that respond to immediate physical needs. Hard times require great art. As the venerable women’s suffrage song tells us, “hearts starve as well as bodies. Give us bread but give us roses.”

Scott’s song is particularly timely and moving to me. Its message speaks to me as much today as it did when I first heard it last fall.

You are not alone

On this road to freedom.

Where there is good trouble

I hope you’ll consider giving him your vote. 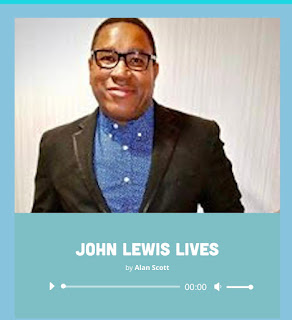