I’ve been telling people for years that I live in a neighborhood of quadroplexes. It turns out I may have made that word up. The correct term is more likely quadplex or fourplex but I like mine better. At any rate, it means that our house is a part of a larger structure made up of four independent houses. We are surrounded by grass and trees; each house may not have a very large yard but each has a fenced patio. And there is plenty of shared open space for running, playing, sledding, and so on.

It doesn’t look like the suburbia of the neighborhoods I grew up in but it is clearly suburban. When I first moved here I still had a picture of my childhood homes in Cleveland Heights, Ohio in my head and to me my little “quadroplex” was not it.

Things change. Time and life experiences change you. Living through a recession when you realize you are living in a house you can afford while many around you are struggling or losing their homes is truly transformative. Home becomes what you make of it.

So, here’s the thing. I have an invitation for you:

Won’t you be my neighbor?

There are a few homes for sale in my neighborhood. I’ve taken a peek at the ads. It’s fun to take a look and see what someone else has done with a similar space to your own. And these homes are looking good, too. Some excellent work has been done on the inside. You’d be getting a reasonably priced home close to Downtown but still with a suburban feel, if that’s what you fancy.

But let’s talk for a moment about what makes my neighborhood affordable. It’s a word that makes many in Columbia/HoCo shudder or wince: density. Duplex, triplex, quadplex: these are ways to provide more homes on a smaller amount of land than what is required by single-family, detached homes. Some folks I know are deeply distrustful of anything that involves more density.

And some of us wouldn’t have any place to live in Howard County without it.

I came across this on Twitter this week. It’s written about California, but applicable here as well: 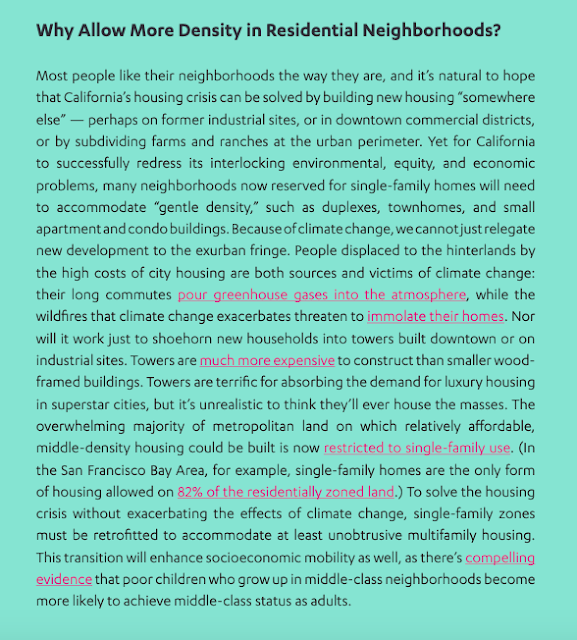 There’s a lot in there to consider. Climate change, for instance. Long commutes. Or the time-worn concept that most people don’t want their own neighborhoods to change but are all for increased housing “somewhere else.” A term I spotted that I’d love to see more is “gentle density.”  It's not tall towers or row upon row of little boxes on a hillside. It’s my neighborhood, or others where multi-family housing is a part of the mix.

Local blogger Frank Hecker (Civility and Truth) offered these words on Twitter when sharing the paragraph highlighted above:

Likely that the future of #AffordableHousing in #HoCoMd is not so much in apartment buildings in #DowntownColumbiaMD (though those are important) but rather in duplexes, accessory dwellings, and small townhome projects in the rest of the county, including Western Howard.

I see many people equate any increase in density with the word “urban”. In some cases I think this is an outright dog whistle, in other cases I think they may not know any better.

We all know that Downtown Columbia is a city, or is becoming a city, or was always destined to be a city. There’s really no surprise if what we see evolving there is urban. But allowing more land around the rest of the county to accommodate a larger share of multi-family structures will not automatically make them urban areas.

Honestly, sometimes I think urban is just another word for “scary” to some people. On the other hand, some may read the words “gentle density” and think “shoe-horning too many people into a small space.”

This past week author Lawrence Lanahan (The Lines Betweeen Us) shared a photo from his newspaper that illustrated an interesting juxtaposition. (Photo used with permission.) 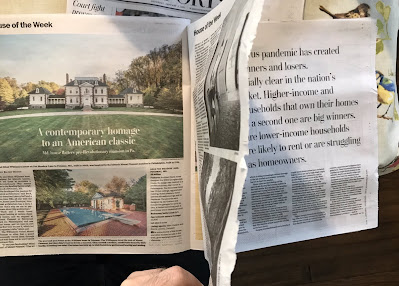 On the left is a contemporary home whose footprint is enormous. It might as well be the Americanized version of something out of Downton Abbey. On the right is an article about who has prospered during the pandemic. I can’t read every word so I’ll need to paraphrase:

When we insist that a majority of our land must be used for single-family, detached homes, we are essentially declaring winners and losers from the get-go. It determines who can afford to live here, who pays a lopsided share of their income because costs are too high/housing scarce, who can’t live here at all but is forced to commute.

Some people are just fine with that. I’m not. I think that we can do better overall by supporting housing for people at a variety of income levels in Columbia/HoCo. 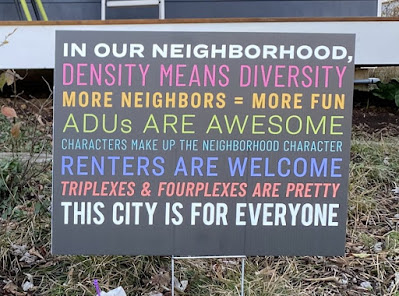 Maybe density isn’t as scary as you think, friends. Maybe we should be making room for better places to live for people who work here already and add to our community in a variety of ways.

And you should definitely come and take a look at houses in my neighborhood. You might be surprised by how lovely it is here and by how far your money can go. It could be a transformative experience.