When I was little in Cleveland Heights, Ohio, I loved to watch cartoons every afternoon on the Captain Penney show. Occasionally I would turn I the tv and see this: 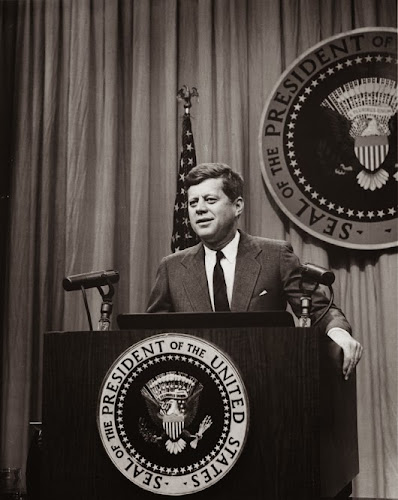 That meant there would be no cartoons. I just hated that guy with the scary eagle-snake-thing that got in the way of my cartoons.

I don't remember the day Kennedy was shot, but I do remember knowing that he was dead and that it was a bad thing and people were upset. And I knew it was my fault because I had thought mean things about him when he had press conferences that interfered with the Captain Penney show. I started to have nightmares. 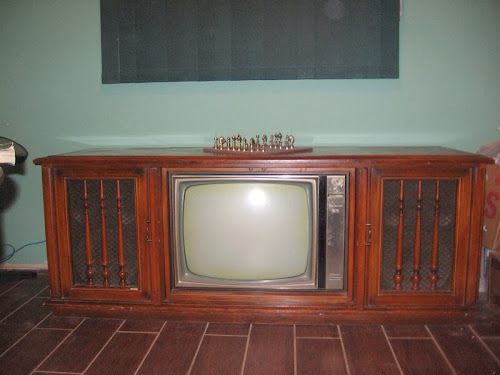 In my nightmares, a large, imposing console style television in a dark wooden cabinet would appear in my bedroom. The only thing on the screen was President Kennedy, just a close up of his head, talking, talking, talking...Night after night I was haunted by the talking head of JFK. I was afraid of the television, too. We didn't own one like that, it felt alien. It was the television of foreboding.

Years later, when I was in elementary school, I put the needle down on a promotional recording about the space program. To my horror, it began with John F. Kennedy's speech about space exploration. Although I hadn't thought about it for years, the sound of the dead president's voice brought back the prickly horror and dread of those weeks after the assassination. I knocked the needle off of the record, covered my ears and rolled into a ball.

I don't remember what I knew. Clearly deep inside me was a knowledge of fear, grief, disruption, hopelessness, and anger that stemmed from that horrifying day fifty years ago. I was four. I couldn't make any sense of it. But I absorbed it in a vivid and distorted way.

Just think: four years old on 9/11. Four years old at the time of the Newtown shootings. What will our children carry inside them from those awful times? How will those ghostly half-memories affect their lives?

Posted with Blogsy
Posted by Julia A. McCready at 1:48 PM