Fingers are important. We do a lot with them. They figure prominently in many of our idioms. Pointing a finger, wrapped around a little finger, working fingers to the bone...and that is just scratching the surface. (Insert rim shot here.)

The Flying Fickle Finger of Fate Award, salutes actual dubious achievements by the government or famous people, such as the announcement of a new Veterans Administration hospital to be erected in Southern California shortly after another such facility was destroyed in the Sylmar earthquake of 1971. The trophy is a gilt, outstretched finger atop a square base.

I am resurrecting the Flying Fickle Finger of Fate as a way of recognizing the crazy world of political financing which has so many of my friends clicking "refresh" in order to sort out the monetary pecking order of the current candidates. I just can't stand this. Yes, I'm told it is just a part of the deal but that doesn't make it any more sensible to me. So I'm giving it the Finger. 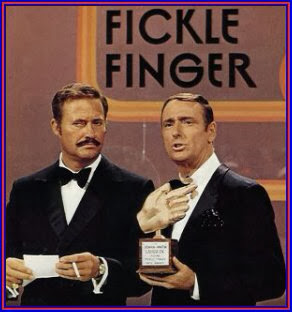 We all do things that don't make sense. Speaking of fingers, I realized recently that I had developed a rather odd habit when using the iPad. Once I had pressed the screen to "copy" something, I found that I was keeping my pointer finger elevated until I "pasted" the item somewhere else. Something in my brain had decided that once I had performed that action, the information was then in my index finger until I completed the task. I realized to what extent I had internalized this ridiculous assumption when I found myself protecting my index finger on the way upstairs after my ipad had run out of charge--was I really thinking I could transfer the information from my finger to my husband's iPad?

I wasn't consciously thinking at all, of course. Once I realized what I was doing I had a good laugh at myself.

While it's true that I am "poking" fun at political fundraising today, I am also offering up a VG/TS HoCo Holler to candidate Tom Coale, who is running for State Delegate in 9B. Despite the crazy demands of campaigning and political fundraising, he is giving you a chance to do something meaningful with your finger today.

A "share" or a "like" today will mean a donation of his own money to the Community Action Council of Howard County. Go here to read all the details. I love this because it is a true expression of Tom's core values: a desire to help others, support non-profits, engage the community, and put a sense of humor and fun into civic participation.

So take your finger and click for the CAC. First though, make sure there's no information leaking out of it...