My Commercial for Summer

This ad yesterday made my skin crawl. It is creepy. Watching this confirmed every reason I have ever had for refusing to buy a Nintendo 2DS for my child. They have depicted children in all the iconic locations of summer, but the kids aren't really "present." They're disconnected from the natural environment. It's manipulative, and sad.

So, with a nod to this loathesome little piece which subverts the real joys of summer, here is my commercial. You'll have to use your imagination.

A sunny day. A happy child is biking along, tossing newspapers to front porches along a paper route.

Narrator: Have you heard the news? Summer's coming. Will you be ready?

Camera pulls back to show second child on bike, happily reaching into a pouch and tossing Nintendo 2DS devices in to trash cans along the route.

Parent is throwing diving targets into the pool for kids to bring up. They are revealed to be 2DS devices.

Scene shifts to the beach where kids are digging in the sand with the 2DS, and using them to embellish sand castles. One child loads one up with seashells and floats it it to sea.

Narrator: Or soaking up the sun with your friends?

Next scene--child nailing steps for a treehouse into the tree. Each step is a 2DS. Moving up the steps, the camera shows children in the treehouse consulting a handmade treasure map. They look down at a child in a hammock, reading a book. Next to the hammock is a side table with a glass of lemonade, resting on a coaster. The coaster? A Ninetndo 2DS.

Narrator: Your imagination can take you anywhere. The sky's the limit.

Final scene: the sun has come down and children are roasting marshmallows around a campfire. The fire pit is delineated with a circle of Nintendo 2DS devices.

Narrator: This summer is going to be the best one ever. Because you're going to throw yourself into every minute.

Commercial ends with these words appearing on the screen: 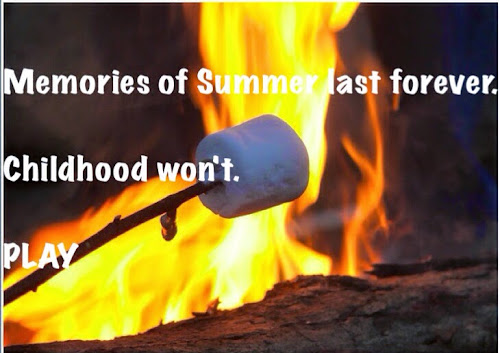 Posted with Blogsy
Posted by Julia A. McCready at 5:24 AM