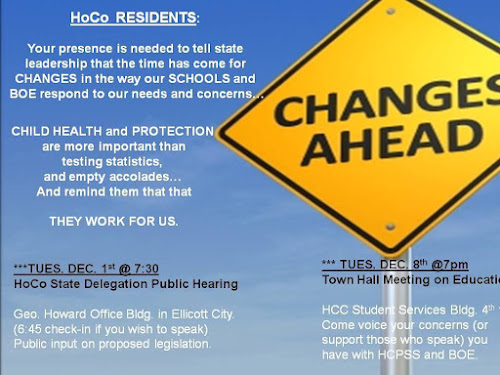 Tonight is the first of two meetings where you have an opportunity to voice your opinions and concerns about the Howard County School System. Tonight's meeting, which will be held in the George Howard Office Building, will adress (among other agenda items) two proposals:

I'm sharing the photo above because I think it says a good deal about where many people are right now in regards to the school system. For the most part, people just don't reach out to elected officials for redress if they feel that their concerns are being handled respectfully and in a timely manner. The momentum which brought about this kind of intervention is significant.

We do know that the Board is aware of these goings-on because they a) tried to prevent any Board members from testifying, and b) voted to condemn the legislation before the meetings were even held.

Everyone knows I hate public meetings. Barring a family emergency, I will be there. I do not intend to speak, but I believe that there will be an opportunity to sign in as "in favor of" or "opposed to" the two proposed bills. And that matters. People in the room--it matters. Bodies in chairs--it matters.

This is our turn to have a say. "Democracy in action." If you care about these issues, please try to come. If you are unable, or if you are going to attend but hate public speaking, send an email voicing your thoughts. I would suggest Delegate Vanessa Atterbeary for electing members by district, and Delegate Warren Miller for the transparency proposal.

Take a look at this piece by former Board of Education candidate Lesie Kornreich if you want a good look at this issues involved in changing how we elect Board Members. She covers the topic well.

Tonight, and next Tuesday night, are our "We the People" moments where our participation or lack of it will make a huge difference to our children's futures. Please find a way to participate and be heard.