The tweets seemed to come like a summer rainstorm, first one, then another, then a pause, then another, then several, then the onslaught. County Executive Allan Kittleman's Twitter feed was hopping this past weekend. As I watched on Saturday, little drips and drops built up to a steady rhythm of public engagement: references to the recent article in the HoCo Times about his first year, the accompanying editorial, the announcement with Governor Hogan of the widening of Route 32...

The Kittleman administration came in clunky and flatfooted when it came to social media. (Of course, the Ulman administration was a tough act to follow in that regard.) I've got to hand it to the Kittleman folks, though. They have improved by leaps and bounds. They were certainly working overtime this last weekend.

As I watched this unfold, I began to wonder what the point was. And then it was revealed. 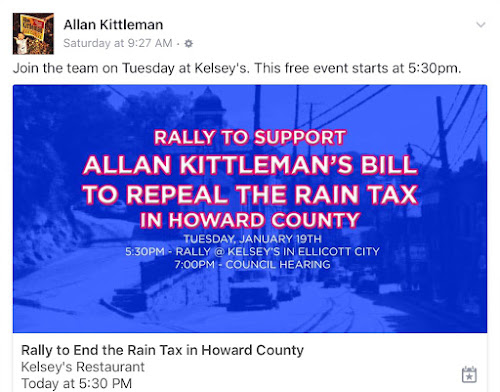 By golly, we've got some good old-fashioned politicking going in the HoCo, and Mr. Kittleman would like you to get on board. (You can read my take on this here.) He says we don't need the Stormwater Remediation Fee to take care of our obligations to keeping the Chesapeake Bay clean. He says that can be covered by the General Fund. Has he explained how he's going to do that?

No. At least, I can't find any specifics.

I know some folks who, in the past, might have wanted to take a stand to support Mr. Kittleman but will probably take a pass to be a part of the team this time. Parents of children sickened by mold at Glenwood Middle. Parents of special education students who've been harassed by school system lawyers. Community members who have reached out to the County Executive in response to increasing dissatisfaction with Board of Education and Cental Office decisions. A grieving mother whose beautiful daughter can never be brought back.

I suspect many of these might have been the kind of people who wanted to see Mr. Kittleman succeed. But I think they just may sit this one out. A great social media campaign can't make up for a failure to respond to one's constituents. With these particular people, Kittleman just doesn't have "money in the bank" anymore.

Will the County Executive have his way? Perhaps. I think it's safe to say he's "optimistic."

If you want to turn out for Team Kittleman, your info is above. If you want to support the Stormwater Fee and protect the General Fund, write the County Council and come to tonight's Council Hearing: George Howard Building, 7:00 pm. (Wear green.)

There's no free rally for you, but I think you may still be able to purchase healthy snacks and drinks from the machines in the lobby.