The following editorial appeared in last week's Columbia Flier, accompanied by this cartoon: 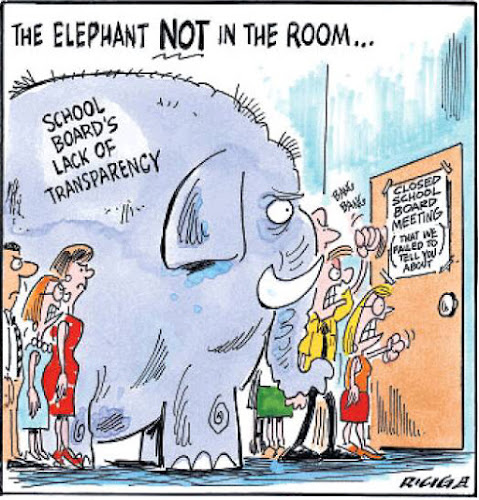 I am printing them in full because I can't find a link to where they can be found at baltimoresun.com. To be clear, neither the cartoon nor the editorial are my work. They are the property of the Howard County Times and I am sharing them for the purposes of discussion.

The community has endured one school-system based crisis after another over the last year. There was a time when a piece such as this would have been earth-shattering. Now it seems that it's merely another confirmation in a steady stream of evidence that HCPSS leadership operates without transparency and without thought of accountability.

It is summer. Most of our children are out of school. We are thinking about other things. People I know read this and thought, "no surprise here." Are we becoming desensitized to the level of disrespect shown to the community?

If HoCo Times thought this was worth writing, it's probably worth our time to read and discuss. This is big stuff, folks. Is this how we want our school system to be run? If you haven't already, take a look:

Howard County’s school board has been slapped on the wrist by the Maryland Open Meetings Compliance Board for the procedure it followed – or didn’t follow – in closing a public meeting at which the school superintendent’s contract was renewed.

Although the school board has every legal right to discuss contracts and other personnel and legal matters behind closed doors, in the case of the early February vote it failed to detail the reasons for ordering the public to leave. It’s a technicality that the school board is appealing.
Missing from the discussion is the Board of Education’s broader history in dealing with matters
of public importance and interest.

Awarding a $273,000 annual contract to the chief executive officer of a public institution should be one of those matters, even if it involves the airing of on-the-job performance concerns. (There is nothing to suggest that Superintendent Renee Foose’s stewardship of the school district is lacking.)

The public has the right to know how tax dollars are being spent and more about the benefits a CEO receives, such as a car, contributions to pension and insurance and other perks.
Such compensation packages are routinely included in the filings of publicly traded companies with the Securities and Exchange Commission and they’ve occasionally brought a backlash from shareholders frustrated by a company’s lagging performance.

For many months, even years, critics have complained the school board lacks transparency.

The state legislature intervened this year to mandate an ombudsman’s review of how the system has responded to other requests from the public for information, a rare rebuke after some parents complained about access to information. The findings are due by next year.

The meetings compliance board determination adds a dash of salt to the wound, advancing the perception that the school board really doesn’t want some issues fully aired.

The shareholders of the school system, the voters and taxpayers, are the ones to send a message
to the school board that it must do a better job in opening its deliberations and decision-making
to public scrutiny.