Mold grows in unseen places: behind, beneath, between. Under, above, maybe just out of reach. It thrives in darkness. 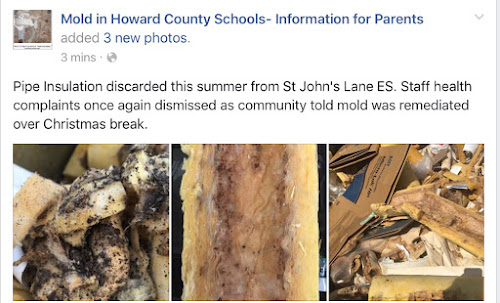 Mold is on my mind this morning because yesterday was the one-year anniversary of my first post about the mold problem at Glenwood Middle School. In "Mold and Truthiness" I outlined the loss of trust with the Glenwood School community because of the school system's failure to communicate promptly and thoroughly about mold in the school.

A parent was quoted in the HoCo Times:

"As a community, we need to demand confirmation of mold remediation and INDEPENDENT indoor air quality testing of all rooms and inspection of walls and ceilings for presence of mold--This should occur FOLLOWING the completion of the HVAC upgrades, BEFORE the start of the school year," read a post about the email July 22. "We cannot allow our teachers and students into a building without knowing that it is a safe environment."

There was a brief moment where the school system seemed to be saying that they "got" the message. It was in November, four months after this parent's impassioned statement. Frank Eastham was quoted in the HoCo Times from a meeting with the community:

"We were trying to identify the source of the problem before we communicated what the issue was, so that we would know if we had a solution to the issue," Frank Eastham said after a parent asked why the school system decided not to communicate with parents about mold growth at Glenwood Middle School immediately after it was discovered. "In the future, we will be more transparent in order to continue to build trust in the community."

The title of the article: School officials say 'lesson learned' about transparency.

Unfortunately, the level of transparency around issues of mold after this meeting did little to build trust with the community. Talking the talk was not followed by walking the walk. Mold continued to be an issue at Glenwood. The school is undergoing multi-million dollar renovations to address this, even though the community was told long ago that all mold had been completely "remediated" and their were no health risks whatsoever.

It should be no surprise to anyone that community concerns led to activism at the local and state level. The County Executive and the County Council took action to look at the issue of mold in all our schools. The State Legislature responded to issues of transparency and accountability brought to them by parents and members of the Howard County Delegation.

Mold continues to be discovered in other schools around the county and communication with parents has been sketchy at best. We have toxic learning environments for teachers, staff, and students, and still the greater focus seems to be on keeping the community in the dark. "Lesson learned"? I don't think so.

As I re-read last year's post, this paragraph jumped out at me:

It reads now as an almost creepy prediction of the year that followed.

Mold and malfeasance thrive in the dark. Healthy communities do not. If you are looking for a place to find the most up-to-date findings about mold in our schools, it won't be from the school system. It will be on a school parent's Facebook page. Will this be the same a year from now?

That depends on you.