The best thing I've seen on social media this morning is a panda eating a Popsicle. National news is just nuts.

Locally, there are two new articles in the Howard County Times:

As to the first article, the issues on the table for Downtown Columbia appear to have spawned a new Twitter account. 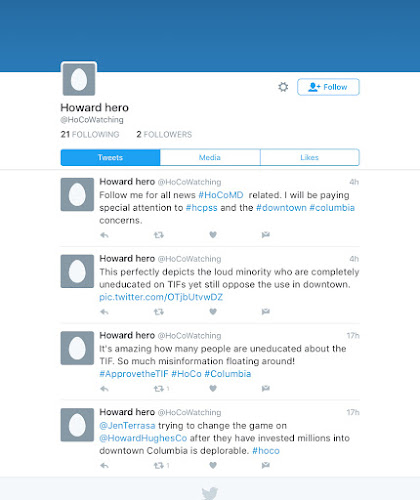 As with the now-defunct HoCoPollster account from the last election cycle, establishing a social media account where you want people to trust your expertise without revealing your identity is problematic. It's hard to trust an Egg. I'm fine with variety of opinions, just be honest about who you are.

The second article, about the racial divide in Howard County Schools, focuses on the continuing disparity in the suspension rate between white students and students of color. Even with indication of recent improvement, the rate for black students is still almost seven times that of whites, and well above the national average. This sentence from African American Community Roundtable leader Larry Walker speaks to a core issue underlying the data:

"If you don't acknowledge that I live a different reality, you're not willing to do anything to change that reality, to make our realities more similar."

The African Amercian Community Roundtable has also started a Change.org petition to reinstate the Coordinator of Diversity and Inclusion position in the HCPSS budget. Here's the link.

I post this petition here for your consideration. I have signed it. Read it and see if this is something you can support.

Truth in advertising: I was not orginally in favor of this position, because I doubted the sincerity of the proposal itself. I have changed my mind, largely through conversations with people who "get" the complexities of this more than I. I could write an entire post on that alone. I might.