How well do you know your co-workers?

Think for a minute. Who would be most likely to front you lunch money if you forgot your lunch? Who’s most likely to be late without a good excuse? Who is the best person to work on a team project with? Who is lamentably all talk and no action? Who always takes the time to ask about your family?

Who is most likely to wangle six figures out of management?

Yes, I’ve been thinking about Governor Hogan and his pick for Chief of Staff, Roy McGrath. I started to say “ill-fated” pick but that sounds like something bad happened to him. In truth, McGrath brought this upon himself. What is foremost in my mind is how well one would need to know a job applicant to have a sense of whether they were likely to use other people’s money as their own.

Thanks to dogged and clear-headed reporting by Pamela Wood of the Baltimore Sun, we know: 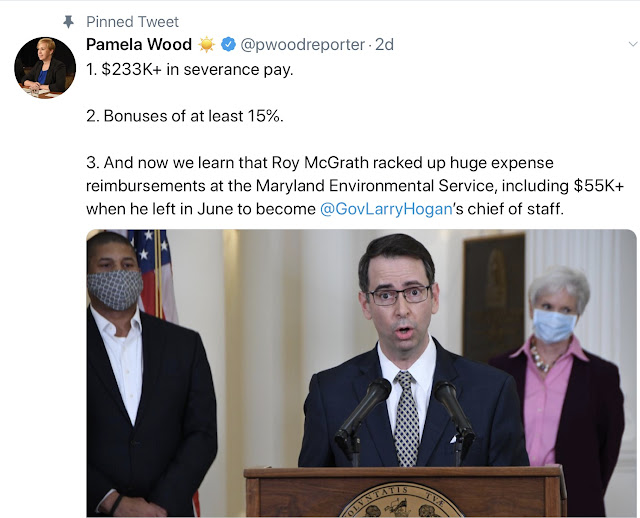 McGrath used the transition from his job with the Maryland Environmental Service as an opportunity to fund his own personal nest egg. His response when caught showed a profound misunderstanding of how tax dollars work and, in essence, a profound disrespect for taxpayers. This was not a small error in accounting, or a legitimate misunderstanding of his job benefits. This was intentional.

So, back to Governor Hogan. Let’s say you have a new hire coming in. How much can you possibly be expected to know about them, really? If you are the Governor’s office I suppose you do the usual vetting, and there are interviews. But might it be possible that someone with such this kind of ethical shortcoming could breeze through without being detected?

Maybe. But McGrath was not an unknown quantity. He was not someone new coming from the outside. From Luke Broadwater’s piece in the Baltimore Sun on May 26th:

Roy McGrath, CEO and Chairman of the Maryland Environmental Service Board of Directors, will become Hogan’s new chief of staff. He was previously a senior advisor to the governor, deputy chief of staff, and liaison to the Maryland Board of Public Works.

“Roy McGrath is an experienced public and private sector leader with a proven track record of managing at every level of government and a passionate commitment to public service,” Hogan said. “Roy has played a key role in our coronavirus response over the last three months, so his transition to chief of staff will be seamless.”

Hmm. Maybe not so seamless.

Governor Hogan’s background as a successful businessman has long been a quality pointed to by his admirers. But don’t truly successful businessmen have a good sense of who to hire, who would be best for what job, who can be trusted? Isn’t that a requirement for effective leadership?

As I ponder the McGrath debacle I am left with two possible scenarios.

1. Hogan was completely ignorant which means he isn’t a very good judge of character or an effective leader.
2. Hogan knew and it wasn’t a deal-breaker to him because his idea of business doesn’t preclude this kind of self-dealing. And that really calls into question what kind of leader he is.

The way that the Governor is handling this episode is yet another indicator of leadership or the lack of it. Do we see him taking responsibility? Have we seen a sincere apology that anyone from his administration could have been trying to use tax dollars this way while the citizens of Maryland are struggling with the financial  hardships brought about by the pandemic?

After yesterday’s episode of political theatre where Hogan threw school systems and local jurisdictions under the bus in an effort to look good at others’ expense, I’d have to say no. He’s taking the distraction approach.

And, about that press conference? That’s another blog post altogether.