The Law of Attraction

I was going to write about something else today but I saw something last night that stopped me in my tracks. 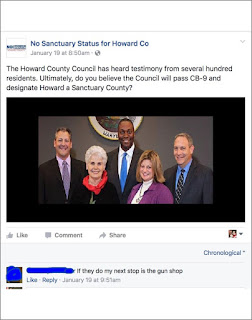 Susan Garber wrote a blog post about how perfectly good people were afraid to testify against CB-9 for fear of being labeled racists by mean-spirited liberals. I do wish those perfectly good people had turned out, because the ones who have shown up so far are largely rude, angry, narrow-minded, and threatening.

You may not be convinced by this legislation but at least the people it attracts are advocating compassion, evidence-based decisions, and a welcoming community. If the worst they can do to you is suggest that you check your privilege--well--I think you'll live.

A shout-out to Chris Krupiarz who has done a masterful job creating a one-stop location for all things Sanctuary:

You won't find any mean-spirited liberals here. Just testimony, opinion pieces, articles on the law and on how sanctuary cities have worked elsewhere.

FYI: There's a legislative worksession today which will include CB-9. Observers are permitted, no testimony will be taken,

There is a PATH Action scheduled for January 29th in support of CB-9, beginning at 4:30 at the Wilde Lake Interfaith Center.

What kind of people do your ideas attract? Food for thought on a rainy Monday in January.