Heritage, or: My Grandmother the Birth Control Activist

We called her Gaga, because one of my older sisters couldn't say Grandma. She wore very colorful suits and sparkly costume jewelry. She was a pretty terrible cook. She didn't bake cookies and she wasn't very snuggly. She was, as my mother put it, a "career woman."

Here you see a mention of her passing in the newsletter of the National Council for Family Relations.

Maternal Health. I grew up knowing that's where Gaga worked, but I had absolutely no idea what went on there. I only truly came to understand when she died, in 1978. I was almost twenty. The magnitude of what she had done began to hit me as I read her obituary. We had submitted one to the Cleveland Papers, along with a photo. When it showed up in the paper it had actually been augmented and the photo was one from their own files.

So, what was Maternal Health?

You can see a mention of my grandmother, Hazel Cornell Jackson, in the clip above from 1938. Look to the right. A victory for birth control: books and pamphlets on birth control may now be sent through the mail and received by "persons other than physicians".

What ever you may think the fight at the Supreme Court is about right now, just stop for one minute and remember where we come from. Remember our foremothers. Yes, mothers. Women who sometimes ended up with four children in as many years and had no choice. Women whose health was broken by multiple pregnancies and childbirths. Women whose family finances were devastated by ever-growing families they could not afford. 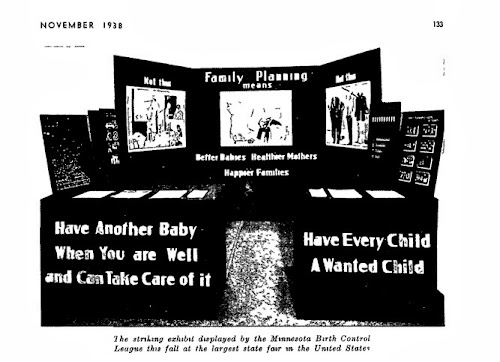 Maternal Health. Women's health. Reproductive Health. My grandmother was a lifelong social worker whose training included family relations, family planning, and marital counseling. She was a well known speaker in Ohio and beyond. She helped to create the first mobile birth control unit that went into poor inner city neighborhoods in Cleveland. Maternal Health, as you may have figured out, was a forerunner of Planned Parenthood.

She did this at a time when it was scandalous, when even sending pamphlets through the mail was considered an act of pornography. She did this so that women would no longer be enslaved by a lack of choice in matters that had huge consequences. All I knew was that she wore "business suits" and went to an "office" in the city at a time when all the other mothers and grandmothers I knew stayed home in the suburbs.

Jen was there as a woman of faith--the Unitarian faith--to support the rights of individual women to decide on matters of their own bodies, rather than assign religious rights to a corporation as a means to controlling individuals. Funny--Gaga was a Unitarian, and so were my parents. When I grew up and embraced Christianity I dismissed Unitarianism as the absence of faith. As I get older I realize how wrong an assessment that is.

So, the story in my family is that when I was born, my grandmother was beside herself. My parents already had two children, born three years apart. I was an "oops", who came along six years later. Here was my grandmother, promoting birth control to help couples plan reasonably-sized families, and her own son and daughter-in-law had three children!

She loved me anyway. She took me to see the Christmas lights at NELA Park, and she took me to the downtown department stores to see Santa. She let me drink iced tea at the Hot Shoppes at the mall even though Mother said no. She had me over for countless sleepovers. She let me sit at her antique vanity table and play with her fancy costume jewelry.

Today, and every day, I honor her and the work that she did. I can't believe that we are fighting these battles all over again, but fight we must. I love you, Gaga. I won't forget.

Posted with Blogsy
Posted by Julia A. McCready at 5:50 AM