All Alone by the Telephone

Howard gears up for Bike to Work Day

What do these four Baltimore Sun/HoCo Times articles have in common? They're all by the same author, Amanda Yeager. If you want news in Howard County these days, she's pretty much it. I'm imagining her in the corner of a dusty newsroom, with a dozen phones on her desk...ringing...ringing...

Our local journalism coverage is shrinking and her job just keeps getting bigger. Young, able journalists are jumping ship to get better jobs outside of traditional journalism:

Blair Ames? Headed out to Vegas to work for the World Series of Poker.

Now, Amanda is not entirely alone. I would be remiss if I didn't mention multi-talented Jon Sham, with whom I had a fascinating conversation about the state of local journalism at the Colonel Gateway party at Aida Bistro. As he works to combine traditional reporting with photography, video, and social media outreach, he must deal with older supervisors who don't get the point of his multi-pronged approach. They don't see it as a priority.

What's happening here in Howard County is not merely a local phenomenon. We all know that. My dad saw the writing on the wall in the 1970's when he and his colleagues were designing computer systems for newspapers and magazines for IBM. Someone in his group began to write a serial retelling of the Lord of the Rings saga in which the hero went out into the world bearing a velvet drawstring bag with the last piece of "Hard Copy" inside. Even then, they knew. And despite being creators on the leading edge, they were already feeling nostalgic for the good old days of printing and publishing. Sad, even.

Recent events in Baltimore have shown how incredibly blessed the city is by the reporters of the Baltimore Sun. Those of us who followed the events of each day by following them on Twitter know how vital their work was in keeping the public informed. I don't dare start to list names because I'll leave someone out. Journalism matters. We need it.

I just don't know how we're going to support it.

But, lest I leave you down in the dumps, here's a great story by someone I don't know (Tony Glaros) about about a cross-cultural restaurant venture in Laurel with ties to Nepal. Oh, and -- want to do something locally to help Nepal? Go eat lunch. 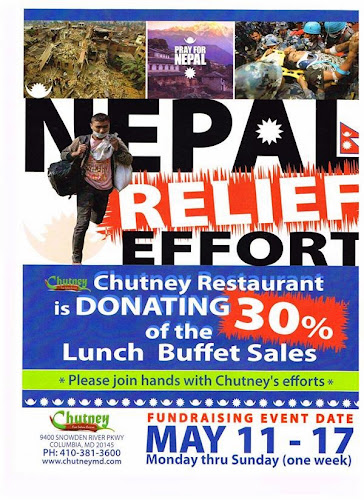