On Saturday I was surprised to see this exchange on Twitter. 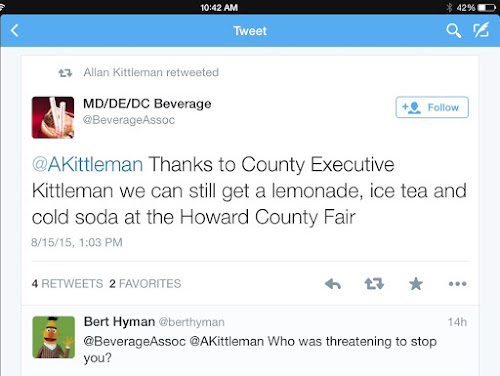 The only reason I was able to see this is that Mr. Kittleman retweeted it. There's just one problem. Drinks at the Howard County Fair were never a part of any legislation on the table. So this pat on the back from the Beverage Association is factually incorrect. And I'm not the only one who spotted that. A local reader responded:
Help me understand. When was this ever in question?
And then, through the magic of Twitter, Mr. Kittleman's retweet was undone and disappeared. A bit later he replied:

In fairness, the ban did not extend to the #HoCoFair, but I am proud to have repealed the sugary drink ban.

Yes, yes you are. And the MD/DE/DC Beverage Association is proud of you too, Mr. Kittleman. As for me, I'd be happier if you had told the truth the first time before you got called on it, and refused to give the appearance of taking credit for something you didn't actually do.

Those pesky facts have a way of coming out.