Two reports yesterday. They couldn't be more different. In one, an article in the Howard County Times, Beverly Davis describes a memo which details restrictions on hiring and purchasing as follows:

The move will likely have "a minimal noticeable impact for students" and the school system is "not using it as an excuse to reduce its commitment to schools in any way," she said.

Another view comes from the memo itself, released yesterday on social media by the BOE campaign of Vicky Cutroneo and Christina Delmont-Small. 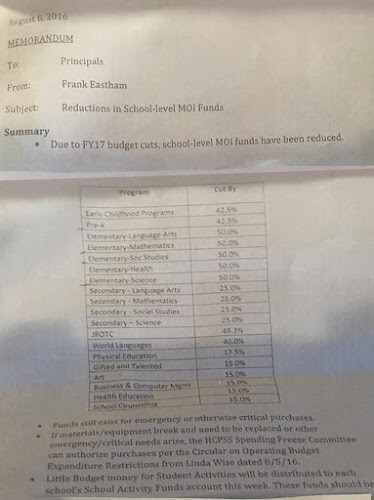 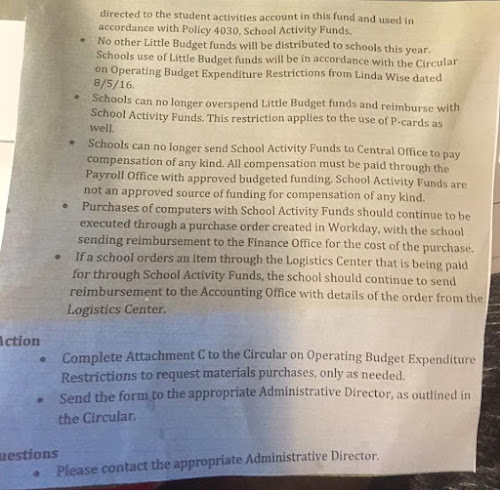 The memo clearly lays out cuts of as much as 50 percent in MOI, Materials of Instruction. These are the funds allocated to teachers which fund items needed for their programs. It is further stated that any shortfalls may not be submitted for reimbursement out of the total school budget, thus placing a stranglehold on teachers as they try to purchase necessary materials for the school year.

Two things to consider: 1) how can cutting materials of instruction have a "minimal noticeable impact for children"? 2) didn't County Executive Allan Kittleman's budget fully fund instruction? I can't believe that this was his intent.

The tell-tale sentence in the HoCo Times article is this:

The belt-tightening, outlined in an Aug. 5 memo to all HCPSS staff, will allow the school system to fund negotiated salary increases, said Beverly Davis, the school system's budget director.

These cuts, which will directly affect students and teachers, are being framed as necessary specifically because HCPSS is being required to fund negotiated agreements with teachers. Not because, say, the orginal budget request was wildly unrealistic. Not because of monies spent augmenting an already top-heavy Central Office Staff. Not because of fancy programs of dubious value such as the Gallup Strengths Finder initiative.

No, the school system is telling us, your children's educational experience is being compromised by those greedy teachers. Look at them. Blame them. Don't examine these other areas where we don't want you to look.

Those teachers, by the way, routinely spend money out of pocket every year to augment taxpayer funds to support our kids' educational experience. Who do you think will be caught making up this shortfall? Teachers, to the extent that their personal finances permit it.

Oh, and those negotiated salary increases? Now you know where they'll be going.

Tell me again why two members of the Board who are responsible for this budget are being permitted to serve on the County Council's audit committee to review HCPSS budgets? Their appointment circumvents the intent of the legislation, just as much as these cuts circumvent the intent of the County Executive when he fully funded instruction.

In short, your tax dollars are being used to punish people: teachers and students. Is that how you would like them to be used?