Taking Howard County Back to the Middle Ages

We all know that person who wants to go back to "the time when things were better." Heck, most of us have moments when we wish we could return to a kinder, gentler world. I'm happy to announce that Abiding Savior Lutheran Church is offering a one-night time-traveling experience which will take your mind off politics, world events, and day-to-day woes. And it's free.

On Monday, September 26th, (that's one week from tomorrow) Abiding Savior will present Stary Olsa in concert at 7 pm. Admission is free, just click the link to let them know if you're coming so they will know how many people to expect. 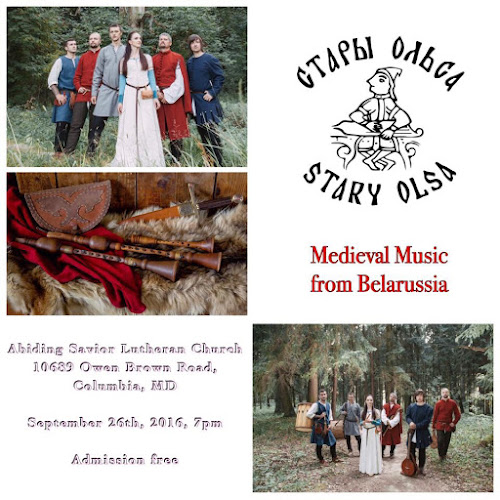 An evening in the Middle Ages could be just the thing to clear your head of twenty-first century stress. From the event page:

Belarusian band Stary Olsa occupies a unique position at the intersections where past meets present, tradition mingles with innovation, and contemporary creative expression has demanded the cultivation of skills that date back to the Middle Ages and Renaissance. Much like their namesake (a wandering brook in the Mahilou region), Stary Olsa's path has been full of twists and turns, and is inextricably linked to the traditional culture, history and music of Belarus and the Grand Duchy of Lithuania.

The band has recorded twelve albums of traditional Belarusian ballads, martial songs, and canticles in addition to popular European songs from the Middle Ages and the Renaissance. Their most current album Medieval Classic Rock, is the result of YouTube postings of informal rehearsal videos in which band members played their favorite rock tunes.

As they kick off their first tour of the states, Stary Olsa's aim is to not only introduce U.S. audiences to the beauty of the Belarusian culture and the richness of its age-old musical traditions, but also show how much it has in common with modern rock classics as they bring living history to the stage!

You can learn more about the band and view performances at their website.

I know Monday is a hard time to add something in to your schedule, but this is going to be fun and well worth your time. How often to you get to venture outside "the Bubble" without driving miles out of your way?

When the concert is over, you'll feel refreshed, and you'll return to all of the conveniences of modern day living with an extra spring in your step.