My daughter came home from school talking about a poster on the wall in her health class that bothered her. There was just something about it that gave her a bad feeling. I asked her if she could snap a picture of it. 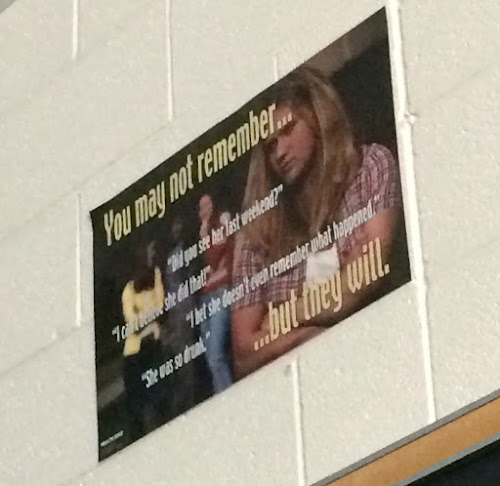 You may not remember ...

"Did you see her last weekend?"

"I can't believe she did that!"

"I bet she doesn't even remember what happened."

First of all, let me state that I am in complete agreement with a goal of addressing underage drinking in health classes with adolescents. I think it's an extremely important issue. But this particular poster is way off base.

It doesn't address health issues. It's a clear example of shaming. And it's really girl-specific. Teenaged girls are already plagued enough by the fear of other people talking about them. They've been socialized to care far too much about that. Now we're going to add another fear--if you drink, people will talk about you behind your back.

I can't for the life of me imagine what a teenaged boy version of this poster would be. It just wouldn't happen. I'm sure boys have their own issues, but they are not going to see a poster of themselves wracked with self-doubt while other boys critique their weekend drinking. And what makes me feel an inherent sexism in this poster.

And can we talk a moment about rape culture? That's what bothered by daughter right off the bat. There's an underlying suggestion that something bad happened that she can't remember. But the poster sends the message that the girl herself is at fault. Not only that, it seems that the major damage that's done to this girl is that she has become the target of gossip.

Hold the phone, people. Don't drink. You could get raped and people will talk about you!

This may be a really old poster, and goodness knows teachers don't have enough money this year for materials of instruction. But all across the country schools and courts are dealing with the consequences of a culture which has brushed date rape/acquaintance rape under the rug. Not a week goes by when a rapist isn't given any more than a slap on the wrist because the judge thinks if she was unconscious it wasn't really rape.

But please, please, please make it a message for every student. A real solution must include everyone. Girl-shaming just makes it worse.