One year, I believe it was in 1966, my mother put her foot down and said no more messy Christmas trees. I was in the second grade and I was not happy about it. I loved the smell of pine in the house, the feeling of hanging ornaments on the prickly, bendy branches. But my mother was tired of being the one who had to water the tree and pick up the falling needles. Or she was tired of nagging her three children to keep up with that chore. I guess we forgot. A lot.

It was our first year in Columbus, Ohio, in a newly-built house, in a newly-built subdivision. Everything in my world was changing. The fancy holiday dresses with scratchy petticoats that tied in the back with a big sash were pushed aside for slim, sleek mini-dresses. Popular culture was obsessed with the Beatles and the British Invasion.

Aluminum trees were new and daring and my mother somehow got a bee in her bonnet that we were going to have one. At the time I felt that this put us at odds with Charlie Brown and Linus in the Christmas special that had debuted the previous season. I didn’t want a “shiny aluminum tree.” I wanted a real tree.

But I was not so much a purist as to boycott the new tree altogether. I was there for its first unboxing. I listened to the magical “whoosh!” as each shiny branch came out of its paper tube. I helped to decorate it and admitted, grudgingly, that it looked good as the color wheel cast its ever-changing glow. But I clung to a loyalty to real trees in my heart.

As an adult I have almost always had real trees. And I realized over time why my mother had gotten tired of the watering and the endless cleaning up of needles. But I’ve never warmed to the second generation, green, “lookalike” Christmas trees. I don’t know why. I just don’t care for them.

Over the last few years I have begun to feel the stirrings of nostalgia for an aluminum tree. If I was going to put aside the joy of a real tree, if even for one year, I wanted it to be for something truly over-the-top, retro, quirky, bold. But my family was dubious. And the cost of vintage aluminum trees was staggering.

Then, when I had pretty much given up hope, a friend from all the way across town in Harper’s Choice let me know that he had one he was willing to part with. At a fair price. And so I finally got my aluminum tree. And not just any aluminum tree, but a gorgeous, full-sized tree with all pieces intact and in pristine condition. With a color wheel. And a rotating stand that plays “Silent Night.” 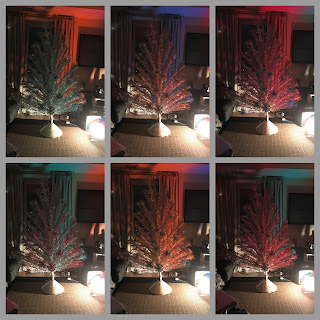 Perhaps nostalgia gets us all in the end. My heart was full and my mind was filled with so many memories of that first Christmas in the new house in what felt like a whole new world. It wasn’t all happy. Much was uncertain. Just like today, I guess.

Many thanks to my friend for bringing me so much Christmas joy this year, and to my family for being willing to try something new. Now they know how much fun it is to pull each shiny branch out of its paper tube. “Whoosh!”