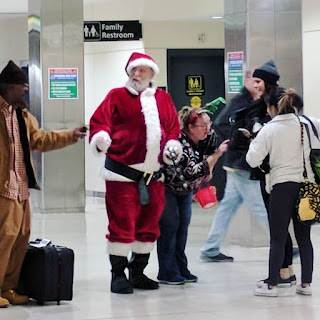 Santa, that is. I’ve only had two entries to my caption contest. Perhaps I should actually announce a prize on the off-chance that winning something might be a motivator.

Winner of the caption contest will receive a 25 dollar gift certificate to the Second Chance Saloon in Oakland Mills.

Deadline to enter is January 5th at midnight. Entries will be judged by me. I’ll probably read them all to my family. All entries will be published in a future blog post for your enjoyment. Submit your entry here:

There’s plenty to unpack in this photo. There’s the gentleman at the far left, then Santa, of course, and the group far right. Not to mention the setting and the signage. Get creative! Could we be seeing a crime scene unfolding? A flashmob gone wrong?

To get your imagination going, here are the two entries I’ve received so far.

"Mommy? Remember that time we were at the airport and security made Santa strip down to his boxers?" (Mickey Gomez)

You could be a winner!