Anyway, here’s my artsy photographic pastiche of the event: 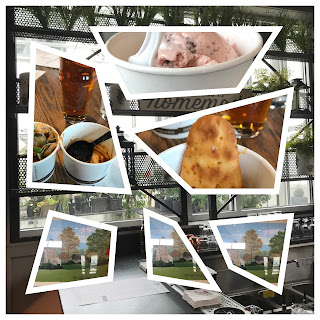 First off, the event was held in the Porch Room of Food Plenty, which is the Farm to Table/local foods restaurant located upstairs at Clarksville Commons. I had never been there so I enjoyed getting a chance to explore the space. I don’t have a lot of adjectives at my disposal right now to describe it but how about: fresh, calming, simple.

Now for the chili. Five of the merchants from the Common Kitchen participated: Great Harvest Bread, Koshary, Namaste Foodie, Scoop & Paddle, and Trifecto. The sixth entrant was event host Food Plenty. My tasting experience was enhanced by the fact that I just happened to be sitting at a table alongside celebrity chili judges Tonya Kennon of the Howard County Library System, and Timothy Banks, Chair of the Culinary and Hospitality Department at Howard Community College. I did not get to meet Ms. Kennon’s lovely dining companion but I can tell you she was rocking an impressive hair bow.

My personal favorite was the lentil chili from Koshary. A close second was the Italian Firehouse Chili by Nadine Crisitello of Scoop & Paddle. (Did you know she used to be a personal chef?) The Food Plenty chili was quite fancy with numerous components, different flavor notes and textures. All of the chilis were very tasty and came with special toppings to enhance your tasting pleasure. The Indian-influenced “chili” from Namaste Foodie came with its own adorable individual-sized naan bread. Nice touch.

The Duckpin pale ale from Union Brewing Company which I picked up at the bar (along with a large glass of iced water) got me through my spicy samplings.

I saw later that the Scoop & Paddle Chili was awarded Best Overall by the judges, and also as the People’s Choice by those in attendance. Namaste Foodie won for Most Unique. (It was that cute little naan bread, I tell you.)

If you are wondering why there’s a picture of ice cream in my collage, that’s because I made a bee-line to the Scoop & Paddle stand downstairs at the Common Kitchen to cool off my mouth with some Chocolate Covered Strawberry. A thought: their smallest portion is really too big for me. I wonder if they have a Kid Size that’s available to anyone. I’d be willing to pay more than half price for a half- sized serving,

A special treat for me at the event was getting to have a few words with Clarksville Commons developer George Stone, and Anastasia MacDonald, Director of Community Relations for Clarksville Commons. They’re both such welcoming people. (A good sign for a place that wants to connect with its local community in more than the usual ways.)

If this post has put you in the mood for 1) community involvement 2) charitable giving or 3) chili, I’d like to invite you to the Great Chili Cookoff at Abiding Savior Lutheran Church. It’s on Saturday, March 2nd and the proceeds will benefit Bridges to Housing Stability. You probably won’t get fancy toppings and I know you won’t be able to buy a beer, but the chili is always great and the Lutherans are welcoming and full of fun.