I didn’t grow up in a church. The hymnody of my youth was a combination of Rodgers and Hammerstein musicals and the songs of the Beatles. When I got to high school, the songs of the early Beatles were having a resurgence. I bought a newly released collection of their music and played through the volume on my trusty Yamaha guitar.

For me, every situation probably has a corresponding Beatles song. Your own particular generational allegiance will, of course, vary. 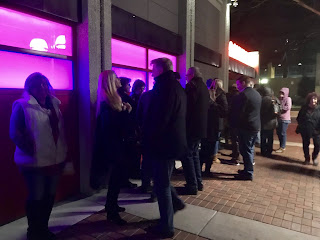 Last night at ten to seven we were part of a very healthy line waiting to get into the Soundry. I snapped photos of the Lakefront at night. My husband noted the age of the crowd - - people nearby were discussing knee replacement surgery. All around us people were chatting about different concerts they’d been to, different venues. My husband and I haven’t done a lot of this together. With our empty nest in the offing, perhaps we will.

The show was great. The players were on the older side. They knew their stuff, they had fun, they didn’t take themselves too seriously. There was a great sense of camaraderie. There were a few musically questionable moments but, really, those are the kind of things that happen in live performance. Hearing this music live was thrilling for me. Some of the tempi seemed slow. Of course, everything gets slower as you age. Perhaps even old man cover bands slow down a bit.


The food and drinks and service at the Soundry were again top notch. They handled the sold out crowd with grace. There’s something so quintessentially Columbia to walk out of the elegantly styled Soundry space and find yourself traversing the long walk through the Tiger Hallway to the bathroom. If there is a Guinness World Record for the most inexplicably long walk to the rest rooms, Clyde’s/The Soundry has it won in a heartbeat.

If there is such a thing as a church of the Beatles I was there last night. I tapped my foot, I clapped, I sang, I mouthed the words, I danced in my seat. I remembered how we used to pretend play guitars in Kindergarten and sing “She loves you, yeah, yeah, yeah...”


Beatles not your thing? I hear they’re hosting an 80’s Dance Party in the spring.