And now a glimpse of the local Republican Party, in its natural habitat: 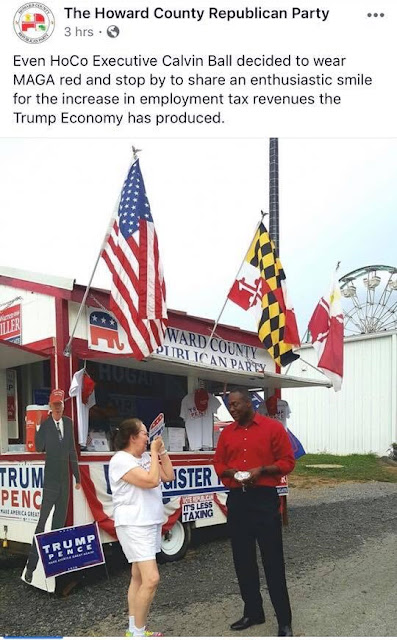 Even HoCo Executive Calvin Ball decided to wear MAGA red and stop by to share an enthusiastic smile for the increase in employment tax revenues the Trump Economy has produced.

This little bit of “humor” is a reminder that the local Republican organization in HoCo has become, more than anything else, the master of the cheap shot. Whether trolling the County Executive on his Facebook page, (sometimes using fake accounts) doctoring photos, or smearing private citizens, the result is the same: cheap.

Perhaps it is all a big joke to these folks. They merely enjoy having fun at someone else’s expense. When Democrats offer big ideas, they laugh at them. When Dems articulate deep thoughts on tough issues HoCo Repubs mock them for their earnestness or joke that the motivation is corrupt and self-serving.

It’s all so much fun. Can we stop laughing yet?

Perhaps this stems from a deep resentment that the current County Executive is a Democrat. Or maybe those whose voices are the loudest do not truly represent the local Republican Party at large. But what is being rolled out for public consumption isn’t pretty. They may laugh the Democrats’ big ideas and deep thoughts but at least they have them.

Interesting story: I was at the fair last year, around this time, snapping photos of the sights. I happened to get a pretty good picture of former County Executive Allan Kittleman sitting in a dunking booth. He was already sopping wet. It was just one of many photos I took that day. I was thinking I might do a photo-based story for the blog.

And then...I just couldn’t use that photo. It was an election year and it might have been tempting to run that photo with a “smart” caption but I just couldn’t. I knew that Mr. Kittleman was there, doing his job, but also being a good sport and allowing himself to look foolish in support of some greater cause. And I was not going to be some smart-ass blogger and take advantage of that vulnerability to be witty.

If there are people like that in the local Republican Party, who think first before making the easy joke, we’re not hearing from them. The folks out front with the megaphone are making the rest of them look bad. Disagreement is fine. Putting forth different ideas is fine. Choosing the ugliest way to make your presence known in the public sphere is not.

Is that the platform that HoCo Republicans are going to run on in the next election? “Vote for us because we really know how cream them in the comments department?”

It’s my understanding that, for Republicans to have traction in local elections, they need some Democrats to cross over and some to just plain stay home. At the rate they are going now, neither is likely to happen. People want to believe in something more than cheap shots.