Take a look at this list and see if anything jumps out at you: 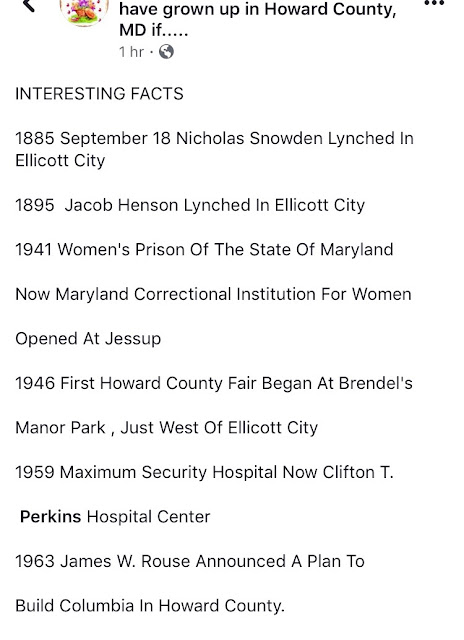 I was truly stunned. Here’s a list of “Interesting Facts” about Howard County and it begins with lynchings. These are not interesting facts. Interesting Facts might be “Washington slept here” or “the site of the invention of the first bathtub.”

Lynching is a violent, racist act specifically aimed at terror and control.

I did, but the other folks in this Facebook group did not. They were polite to me but suggested that I got offended too easily. Thus was it made clear that this was not the Facebook group for me. After all, I didn’t grow up in Howard County. So, what do I know?

If you’ve ever heard the term “micro-aggressions” and wondered what that meant, imagine what it would be like to be a person of color reading that list and seeing it defended and normalized by white residents who don’t see what the big deal is, When we reduce lynching to an interesting fact it is normalizing a behavior that bordered on genocide.

Can you imagine the Holocaust or the Trail of Tears listed as “Interesting Facts”? Or perhaps the destruction of the Twin Towers on 9/11 or the bombing of the Murrah Building in Oklahoma City? I suspect not. We can tell the difference. We know better.

Why don’t we know better when it comes to lynching? Because we are white? Because it’s not a part of our cultural history? Because our schools don’t teach about it adequately? Why could we possibly think it’s some casual thing?

Every lynching is a sacrifice of a black person to the blood lust of angry whites intent on holding on to the power their whiteness accorded them.

That’s not interesting. That’s sick. And we should be ashamed.
Posted by Julia A. McCready at 4:23 AM