My family had numerous cars through the years. The first one I remember was orangish in color and had a hole in the floorboards where salt from too many Cleveland winters had eaten through. We kept old woolen blankets in the back seat because the heating was nothing much to speak of. My mother had a series of Ford station wagons, the kind with the wood-look paneling on the side. It was the car we took for long family trips, back when you could make a bed in the back area and stick your bare feet out the window.

But one car was legendary: my father’s 1967 Acapulco blue Mustang. Whereas my mother got the “family” cars, my father got the sporty ones. And this car was a beauty. I remember riding in that car with the windows rolled down and the music cranked up on the way to Severance Center Mall in Cleveland Heights. My sister was old enough to drive and she’d sometimes bring me along for company.

That particular model, before they messed it up with the ugly rivets on the back end, remains in my memory as the perfect car. It certainly helps that it is permanently linked in my mind with those carefree drives of childhood, the soundtrack of the times supplied on the radio, and shopping at the Mall capped off with a soft serve ice cream cone.  Of course it helped that the paint color had a fancy feel on the tongue: Acapulco blue. I’m sure I said “a ca po co” and had no idea that the word referenced a real place.

To me it might as well have been a magical word like Abracadabra or Presto Change-o. It was the invocation  of glamour and adventure. And I’m not the only person who has such a strong attachment to this car. It has plenty of devotees. Here’s just one example.

All of this is to explain my excitement at seeing this on Twitter this morning: 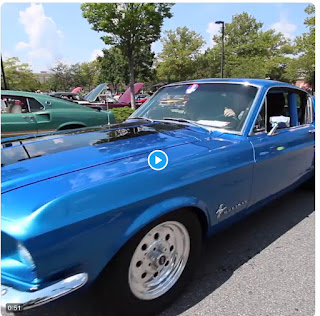 Wait. Stop. That color, those lines. Is it? 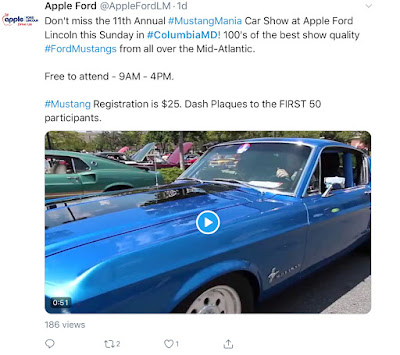 Yes. It’s The Car. And more where that came from. It’s an entire Mustang car show at Apple Ford this Sunday, 9-4. It's free to attend. Learn more here.

I’ve never been to a car enthusiasts event. I once attended the new car show in downtown Baltimore. And I’ve experience the cultural phenomenon that is a Car Boot Sale in South Yorkshire, but that really has nothing to do with the cars themselves. I’m a bit nervous that I’d be called out as an imposter. I’m not a true car expert, or geek, or gear head. But I do wonder what it would be like to come face to face with That Car one more time.

Would I feel tingly? Would my heart beat a little faster? Would I hear music? Probably. I don’t know.