A Cure for Monday


Friday evening I had the chance to experience Elevate Maryland in their new space and, tonight, you can too. They’ve set up shop in their new digs, 10960 Grantchester Way in Downtown Columbia. It’s in the building directly across from Cured.

The space belongs to Howard Hughes and I expect we will be seeing it used for a variety of public events in the future. 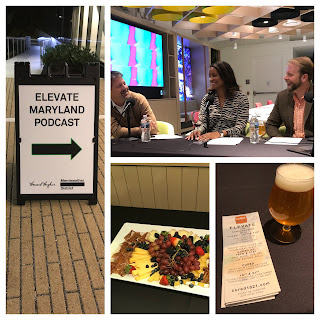 The show ended up being different than I expected due to a last minute emergency on the part of guest Dr. Richard Warren. Howard Hughes’ own Greg Fitchitt stepped in at the last minute and answered questions on Downtown development, affordable housing, equity in our schools, and more. I found his presentation to be relaxed and engaging. (As compared to the last time I saw him speak.) I suspect it’s because  he knew he was among friends and also that the stakes of the event were far lower.  He acquitted himself well. It was a lively and entertaining discussion.

Tonight the show features Montgomery County Council member Will Jawando. From his bio:

...Will has worked with House Democratic Leader Nancy Pelosi, Senator Sherrod Brown, and then-Senator Barack Obama. During the 8-year Obama Administration, Will had the honor of serving as Associate Director of the White House Office of Public Engagement, followed by a position as an advisor to U.S. Secretary of Education Arne Duncan in the U.S. Department of Education.

Since Montgomery County is working on some of the very same issues that Columbia/HoCo is grappling with, I am interested to hear Mr, Jawando’s take on equity in school redistricting, affordable housing, and confronting issues of race as a public servant. Last year I followed along as he live tweeted his experiences in trying to get to work using public transit. I wonder if he will have anything to say on Howard County’s Complete Streets initiative?

Come on out. It’s centrally located. Parking is nearby and free. And you'll get to see a cool new space.