These two stories just happened to be back to back in my Twitter feed this morning: 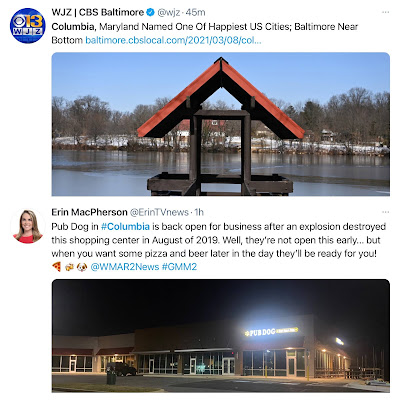 It suggested to me that Columbia just might be happier due to the reopening of much-loved local restaurant and watering hole Pub Dog. Yes, the juxtaposition is merely coincidental, but, can you blame me?

As to the parameters for the Wallet Hub survey, they’re pretty dreadful. I’d recommend skipping that story altogether and focusing on Pub Dog instead.

The last time I went to Pub Dog was to meet up with friend and journalist/writer extraordinaire Marge Neal. That was probably a longer time back than I realize. We went when it wasn’t likely to be busy, possibly the middle of the afternoon. While I like the place overall, I’ve always found the noise levels there to make decent conversation almost impossible.

No Columbia story would be complete without mentioning “the place that used to be there” before Pub Dog. It was the Hard Times Cafe, specializing in Cincinnati Chili in seemingly endless permutations. It was on our regular rotation of local places until it began to go downhill, at least, in our opinion. We were excited when a new place moved in.

The arrival of Pub Dog in Columbia/HoCo was an interesting generational experience for us because we heard about it from our kids - - older daughter and son-in-law - - who were acquainted with the restaurant’s parent location in Federal Hill. There’s just something about having your kids take you someplace that they’re excited about. You realize that you’re entering a whole new phase of your life.

At Pub Dog we enjoyed the creative pizzas and the two-beers-at-once quirkiness but I immediately felt my age as I found myself wanting to ask if they could turn down the aggressive “background” music. I began to wonder how my parents felt at my age. If one must contemplate the steady onset of middle age, there are far worse places than Pub Dog. The food is good and the service is friendly.

For more on Pub Dog and the reopening, take a look at this by Ana Faguy of the Baltimore Sun:

For me Pub Dog will always be associated with memories of several HoCo Blogs events, back when social media was the exotic new thing on the local scene and bloggers actually had a desire to converse with one another. Ah, those were innocent times. Now most people think of social media as the relentless spigot we can’t turn off and, as I’m sure you know, blogs have been declared obsolete.