The feeling of a true crime television show burst into the local consciousness yesterday afternoon as area news outlets broke the story.

David Crawford, an Ellicott City resident and former Chief of the City of Laurel Police Department, was arrested yesterday on arson and attempted murder charges in connection with a series of incendiary fires of homes, vehicles, and residential garages since 2011.

This piece of information from the Baltimore Sun article by Ana Faguy is chilling:

Police said they first searched Crawford’s Howard County home in January and found a target list of known victims along with other evidence.

It is naturally upsetting to learn that someone in one’s own community might be involved in violent criminal acts. That it was someone like Crawford, known for a career with various police departments, makes the story exponentially more horrifying to many. It’s quite simple: someone the community trusted to uphold the law very likely spent years secretly breaking it.

This piece of news made me think about who we trust, and why. Like many folks, I took to Google to learn more about Crawford. I discovered that he had come out to give testimony against Howard County becoming a sanctuary county in 2017.

Here we see the upstanding white police officer raising the spectre of immigrants and crime. In his world it’s simple: the bad guys don’t look like us. Funny how he himself is a prime example of how that may not true.

This tweet from activist and former Columbia resident Bree Newsome Bass hits the nail on the head: 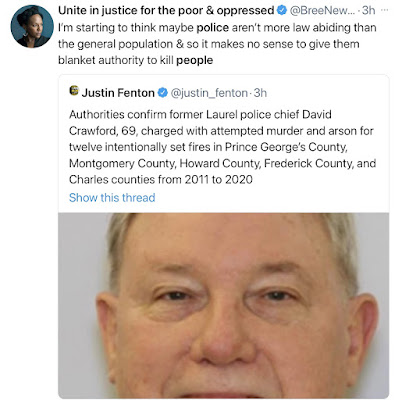 I’m starting to think maybe police aren’t more law abiding than the general population & so it makes no sense to give them blanket authority to kill people.

That’s a lot to think about. Crawford’s arrest challenges notions of who the good guys and the bad guys are. I think it’s a conversation we need to have. As we confront story after story of violence towards Black and Brown people by police, and look at data on the school-to-prison pipeline showing how futures of students are harmed by racially-biased school policing, it’s time to go beyond the good guy/bad guy stereotypes.

The bad guys can look like us. They can live in our neighborhoods and interact pleasantly wth us on social media. In a sense, both Crawford’s whiteness and his affiliation with the police were his “secret weapons” in perpetuating ten years of crime. When we assess who is dangerous and who is trustworthy based on cultural stereotypes we do ourselves and our communities a disservice.

This is a very upsetting story; there’s no question about that. But, while the moment is upon us, let’s take the opportunity to have some deeper and more nuanced conversations about the role we want police to play in our communities.