Two years ago today I was attending a vigil at Dar Al Taqwa in memory of Muslims killed in mass shootings in their mosques in New Zealand. 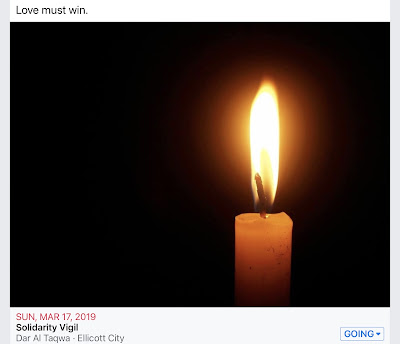 This morning I awoke to continuing coverage of a mass shooting in Georgia which appears to have focused on Asian Americans. It’s yet another example of violence towards people of Asian descent which was spurred on by hateful and derogatory speech from the former president of the United States. Even though he is no longer in power, the dynamic remains: mock, belittle, threaten, blame.

When our worldview is reduced to blaming “other” people who are “different from us” the results are dangerous. The process of “othering” takes away humanity. Continued blaming evolves into a belief that “those people” must be punished. Taking actions on these feelings thus becomes justifiable.

This is a toxic cycle and too many Americans have chosen it. Whether their participation is active or passive, the end result is the same. Today that means a mass shooting in Georgia. Another day businesses are vandalized, or people harrassed and attacked on the street.

My heart is breaking for those whose lives have been shattered by this violence. I don’t know how to find adequate words of consolation for Asian Americans in Howard County whose worlds now feel even less safe. Maybe all we can say is “you are not alone” and then live our lives in a way that truly bears that out.

Is there a way for us to be a light in such a terrible darkness? Or do we simply sit in the darkness with our neighbors and hope the simple act of companionship will do some good? The vigil I attended two years ago was called a Solidarity Vigil. It was an occasion of mutual support. Those of us who were not Muslim had an opportunity come sit with our neighbors in their grief.

In times of great loss perhaps that is all we can do.

One thing we must not do is turn away and hope that things will get better on their own. It can’t be just another day. Refusing to face things that make us uncomfortable provides cover for this hatred and violence to take root and grow. It’s pretty clear that it doesn’t take a day off.