The room grew quiet. It was a depressed kind of silence, as if no one could think of anything to say that would help or make things better.  Finally, someone spoke. "The problem is that we keep hoping for the Great Good Developer who will be to us what we think that Rouse was--and it ain't gonna happen."

He went on, "The County is our Government, and that's where we need to be going if we want things to change.  This kind of magical thinking isn't going to do anything."

We were talking about the Bridge Columbia Project, an idea which would benefit Columbia and Howard County alike.  But we could have been talking about any significant challenge that Columbia faces today.  Insomuch as we have to work with HHC or GGP to get something accomplished, we cannot make them into something that they are not.   They are not like the God-like force protecting the Edo on Star-Trek Generations, looking out for our every need, protecting us.

That's not what developers do.

The People Tree may have come to represent something inspirational about Columbia, but that doesn't change what it is. In his blog post, "Identity Crisis", WordBones tells us, "In the early years of Columbia’s development, the People Tree image was used as a branding symbol for the new town."

We need to make the magic. And we need to forge the relationships that will make that possible. Sitting around waiting for the "Great Good" someone to make things right with Columbia leaves us vulnerable to anyone who knows the real rules of the game and can operate past us in our love affair with Magical Thinking.

We can keep our lofty ideals, and we can fight for the philosophy upon which Columbia was created.  But we need to go where the magic is made, and be willing to make it for ourselves.  And maybe it's time for a new symbol that Columbia and Howard County can share.
*****
Fast forward, friends, to 2021 and a fancy PowerPoint presentation from the Howard Hughes corporation. You may already have seen some of these pages floating around the internet. Of particular interest is the pride HHC takes in controlling cities, describing it as “monopoly-like control.” 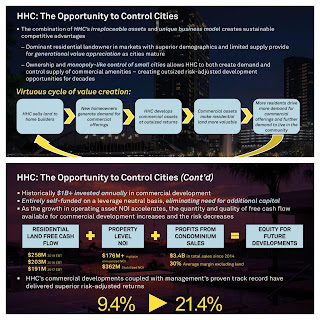 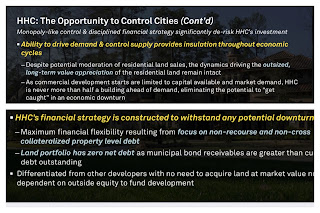 So here we are, Columbia. 2021.
Sitting around waiting for the ‘Great Good’ someone to make things right with Columbia leaves us vulnerable to anyone who knows the real rules of the game and can operate past us in our love affair with Magical Thinking.
Lately I’ve seen some people taking their Magical Thinking and investing it in The Rouse Project. It’s only natural that, in difficult times, people want something to believe in. I don’t condemn that. But cloaking oneself in the image of Rouse when you won’t divulge where your money comes from is just another way of taking advantage of those same people who are still looking for Mr. GoodRouse.
Tell them what they want to hear. Just don’t tell them what you don’t want them to know.
Anyone who tries to sell you a feel-good Mr. GoodRouse vision deserves more scrutiny, not less. If they want your trust they should have to earn it, whether they’re HHC or The Rouse Project.
The fact that Columbia was created as an aspirational community has left a mark on us, her children. It makes us vulnerable to the kind of people who know how to say the right words while simultaneously playing a completely different game, a game that may very well leave us out. In our hearts we’re dancing around the People Tree while they’re playing Monopoly.
So, be careful. Don’t give away your good sense to someone who tugs at your heartstrings if they don’t respect you enough to tell you who they really are. Keep your eyes open.
Posted by Julia A. McCready at 2:55 AM