Reston on my Mind 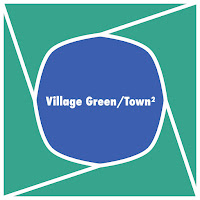 Apparently there’s a rather common misconception that Reston, Virginia was developed by Jim Rouse. Perhaps this is because Columbia and Reston are: planned communities, not all that geographically far apart, and came in to being during the 1960’s. I mention this because I came across a post from the admin of a Howard County, MD Facebook group gently correcting those who had been making this mistake.
FUN FACT: This is Robert Simon, founding father of Reston, VA. Neither Jim Rouse nor The Rouse Company were professionally involved in development of Reston. Rouse and Simon were colleagues in the same business, and collaborated and consulted as colleagues do from time to time, as did Rouse with Walt Disney and many other pioneers in the field. But to say that Rouse designed Reston is akin to saying Rouse designed Disney World, which he didn’t. 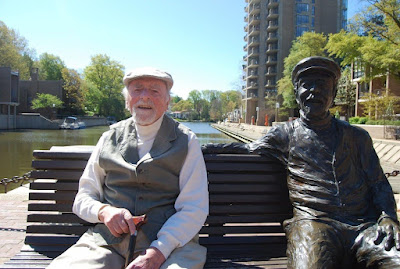 Simon poses on a park bench near Lake Anne, next to his likeness in bronze. The statue was installed in 2004 to celebrate Reston’s 40th birthday.

More on Reston from Wikipedia:

Reston is a census-designated place in Fairfax County, Virginia. Founded in 1964, Reston was influenced by the Garden City movement that emphasized planned, self-contained communities that intermingled green space, residential neighborhoods, and commercial development. The intent of Reston's founder, Robert E. Simon, was to build a town that would revolutionize post–World War II concepts of land use and residential/corporate development in suburban America. In 2018, Reston was ranked as the Best Place to Live in Virginia by Money magazine for its expanses of parks, lakes, golf courses, and bridle paths as well as the numerous shopping and dining opportunities in Reston Town Center.
Robert E. Simon. R E S - ton. Goodness, he certainly put his whole self into it, didn’t he?
I’ve often heard that both places were planned communities, and so similar in that regard. Other than that I really don’t know much about Reston at all. I’ve never been there. Have you?

After I read this one clarifying statement the universe decided I needed to educate myself. The next day I came across a thread on Twitter from an area journalist who had just happened to be visiting, you guessed it: Reston.

Well, the weather outside is frightful, so enjoy this thread on urban/suburban planning & my recent visit to Reston, Virginia (one of the “planned communities” of the ‘60s)! I enjoyed the OG #reston, centered around Lake Anne. - - Bryna Zumer, Content Planner at WMAR 2 News

Be sure to click on the link above. There are some great photos and interesting insights.

Are you aware of the phenomenon where, once you learn a new word, it keeps appearing everywhere you look? That’s pretty much how I felt last night when I tuned in to one of my favorite shows on WETA, “If You Lived Here”. See for yourself:

WETA to feature Reston in Upcoming Show, Fatima’s Waseem for Reston Now (You get cool points if you recognize the name of the author.)

WETA’s latest season of “If You Live Here” will feature the community’s story, art and people on Feb. 14 at 8 p.m.. on WETA Metro and 9 p.m. on WETA PBS. Producers describe Reston as one of America’s most successful planned communities.

The show is a house-hunting series hosted by best friends Christine Louise and John Begeny. The hosts tour homes and communities with local realtors and explore neighborhoods in the DC Metro area.

It’s clear now that I have Reston on the brain and I should just succumb and enjoy the ride. Whether it’s fate or synchronicity, there’s something there that’s calling to me. To learn? To compare? To visit? I just don’t know. But my curiosity is definitely piqued at this point.

Wait. Didn’t the former President of CA, Milton Matthews, come to Columbia from Reston? So much to learn. Where to begin?

Feel free to add your impressions/knowledge/experience about Reston in the comments. I await further edification.